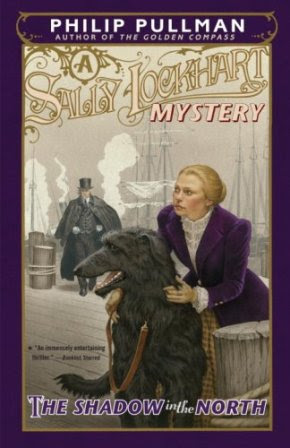 “This was what love ought to be like: playful and passionate and teasing, and dangerous, too, with sharp intelligence in it.”

The Shadow in the North by Phillip Pullman

Sometimes you pick up a book and you are not prepared for how amazing it is going to be or the emotional roller coaster it will put you through. I picked this up almost immediately after I finished The Ruby in the Smoke, the first book of the series. I liked the first book, and thought that this book would be rather similar, which is what I had wanted. However, I was so wrong, and this book was just so much better. I think if I had to sum up this book it would be the YA equivalent of the 2nd and 3rd books of the Millennium Trilogy (The Girl with the Dragon Tattoo series).

This book is set 6 years after the end of The Ruby in the Smoke. Most of the main characters from the previous book are back, and they have become even more entangled in each other’s lives. Fred and Jim are still working at the photography store, but they are also private detectives. Jim helps a magician, Mackinnon, escape from some men who are chasing him. They retreat to the photography shop and Mackinnon tells them that his ability to do psychometric readings has given him information about a murder and that is why the men are chasing him. This leads Fred and Jim to investigate not only the men chasing Mackinnon and Mackinnon’s claims, but also the world of the occult (a fascination of the Victorian time).

At the same time Sally is dealing with her own mystery. Since the last book she has attended Cambridge (although she completed all the work necessary, as a women she was not allowed to earn a degree), and has opened a financial advising business. She is also accompanied by her massive black dog Chaka. One of her clients comes in with the distressing news that thanks to some of Sally’s advice she has lost all of her money. Sally is devastated to learn that she had not realized this, and brashly vows to figure out why the company that the woman invested in collapsed, and if possible, get the woman’s money back. There is a name that crops up in her initial investigation, Axel Bellman, and when she returns to the Burton Street Photography shop, she and Fred realize their cases are connected.

What follows is an intricate mystery with many twists and turns, and the feeling that Sally, Fred and Jim are always just a step behind. While all of this is happening, Sally is trying to figure out what she feels for Fred, and he the same for Sally. Jim is growing up at the same time, and falls for the mysterious and daintily beautiful Lady Mary.

One of the most heart wrenching parts of the story is the frustration and limitations that the women of the book face. There are many freedoms that we enjoy today that are beyond what women in the book (or the Victorian times in general) could have hoped for. Some of the most upsetting scenes happen when the women are left with no way to fight back, their hands are tied by social convention which gives them no independence or very little. The character of Isabelle Meredith is one of the most tragic; as she is besotted with Mackinnon, but knows she can never win his love because her face is half covered with a birthmark. And when Sally comes face to face with Bellman, she realizes that even false words could ruin everything she has ever worked for.

I have to say that the first half is a little slow while it is setting up the start of the mystery. But from halfway through things start going at a good pace. While the mystery is good with twists and turns, it is not to complex, and is solved by about ¾ of the way through. But the intriguing part is how the characters have to deal with the knowledge. How do you break apart a massive conspiracy, and prove that your claims are true?

I think my favorite part is how Sally deals with things at the end. She is a woman who has faced some of the most trying things. For a short while you think that these events have broken her, and that she has lost her ability to fight. But just when you are doubting her, she proves how brave she really is, and remains the unique woman that her father raised in the first book. I have to say I was very impressed with her.

With this book you meet some new intriguing characters and continue to love those from before. But just as a warning, not everyone makes it to the end of this novel. I think that one of Pullman’s strengths is how realistic parts of the story are. These characters get in fights, and suffer from their injuries, sometimes the rest of their lives. Lives are on the line, and you cannot forget that, as no one is really safe. Even when the mystery is over, some things can never return to the way they were.

Final Verdict: Go beg, borrow, or steal it, right now! A wonderfully complex mystery for YA readers, which is a rare gem in the sea of other mediocre stories.