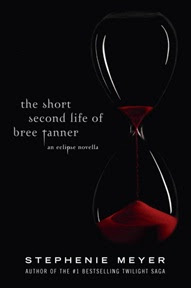 “It was like talking to Diego had cleared my head. For the first time in three months, blood was not the main thing in there.”
Bree, The Short Second Life of Bree Tanner, Stephanie Meyer

Seeing as I read all four books in the Twilight tetralogy, I thought I may as well read The Short Second Life of Bree Tanner, an Eclipse novella by Stephanie Meyer. I was foolishly hopeful that Meyer might have written a decent spin off because the main character is a more traditional Vampire who sees people as food. Unfortunately, I was disappointed. It’s a shame because the story had potential.

The Short Second Life of Bree Tanner focuses on a minor character at the end of Eclipse. Once the Cullen’s have won the war against the newborn army that Victoria created as a distraction so she could find and kill Bella (as a means of revenge for Edward’s part in killing her mate, James), Carlise happens upon Bree. Bree surrenders herself to Carlise as she does not wish to fight. Carlise takes pity on her and defends her against the Volutri. The Volutri show no mercy, as is their reputation, and they kill Bree. The Short Second Life of Bree Tanner tells Bree’s story, from the time she was turned, up until the time where the Volturi kill her. At the beginning of the book, Bree is hunting for blood with three other Vampires. Two are reckless and belong to Raoul’s gang. They savagely flip a car over and pull the screaming woman from the car. Bree and the other Vampire, Diego run and find themselves a pimp and two prostitutes, a less media worthy dinner that won’t get them into trouble with Riley, the boss. Diego and Bree form a bond and the rest of the book is devoted to them figuring out the lies Riley has told, and the true reason they were created. After much deceit, betrayal and heartache, Bree ends up in the newborn army amidst the fight with the Cullen’s. The rest, as they say, is history.

I have mixed feelings about this book. I think that if this was a first draft, I would be a little excited about its potential. It’s disappointing that this is the finished version though. In my opinion, there was too much time spent thinking and trying to figure out what Riley was up to. I think this was necessary, but more action was needed to balance out the thinking. This is something that comes up in Meyer’s Twilight tetralogy also. Meyer seems to devote a lot of time to mundane things, and peoples thought and feelings. As a result, the story never climaxes. Even at the end of the book there is no action (Bree misses the army as she is busy realizing Riley’s betrayal and later when further action occurs, Bree is forced to keep her eyes closed), and the desperation of Bree’s situation is lost. Bree simply accepts the inevitable. I wanted Bree to live more than she wanted to live. I also think it’s sad that I didn’t feel upset when Bree died. Yes, I wanted her to live, but I wasn’t even teary eyed. This is because Meyer doesn’t build up a satisfactory relationship between the reader and Bree, so the reader doesn’t become invested and so doesn’t care about what happens to her. Bree’s only real purpose is to fill in some of the details that couldn’t easily be worked into Eclipse.

There is another shallow relationship in this book. Bree and Deigo know each other for all of two seconds before they want something more. It isn’t just a brief romantic interlude though. Meyer hints that the two have fallen in love, hence why Bree basically signs her death warrant when she turns down freedom in order to rescue Deigo. I wanted to shake Bree and tell her to go with Kevin. She would have been safe, but one brief kiss with one Vampire meant she just had to try to save him. I’m not sure that this is realistic. Wouldn’t survival instincts be stronger than your feelings for someone you only just met? Meyer needed to spend a little more time developing their relationship for me to believe that Bree would act in this manner.

I also found the predictability of the plot irritating. It was blatantly obvious that Riley had lied about everything, and it took a painfully long time for Bree and Deigo to figure it out. Plus, it was obvious what had happened to Deigo. Riley’s behavior read like a book, and only Bree refused to accept the truth. I found myself wanting to shake her and make her see the truth. I think the idea that newborn Vampires can’t think clearly because of the thirst for blood, and the struggle Bree has to go through to keep her thoughts, is interesting. This wasn’t fully explored, however, and I wanted to know more about this. This is a running theme throughout this book. The interesting parts weren’t fully explored; the nest situation where the newborns fight with each other, the extra abilities the newborns have like increased speed or strength, the thirst and the lack of control newborns face, Kevin’s power and Bree’s power—were hinted at in the final few pages. This left me frustrated.

Final Verdict: I wouldn’t read this book. It will leave you frustrated and wishing that this story had been developed to its true potential. Instead, it re-hashes much of Eclipse without offering anything original.