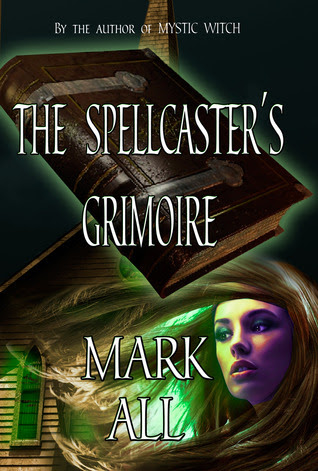 “When a dying warlock entrusts her with an ancient and powerful grimoire, she runs for her life from his murderer, psychotic witch Kate”
The Spellcaster’s Grimoire by Mark All

As I was browsing NetGalley for something to read, I came across this book. I didn’t really like the cover, but the title caught my eye. I really like books about witches so I quickly requested the book. I have to say that this is one of the best books I have read so far in 2013.

The story opens with Trish suffering from writer’s block as she tries to write the third installment in her bestselling series called The Spellcaster’s Grimoire. Each book contains a collection of basic spells. The problem is that Trish hasn’t created the spells herself, she’s taken them from other witches, and she can’t cast a single one. While her mother was a powerful witch, Trish only seems to have a faint spark of magic in her that’s totally unreliable. Just as Trish gives up trying to write for the day, there is a loud thud against the patio doors and in tumbles Benton, a powerful warlock and Trish’s only friend. Trish panics when she seems the dagger protruding from his back and she tries to call for help. Benton stops her and instead explains that because Trish revealed the existence of an ancient grimoire in her latest book, a powerful witch named Kate has come to town and will stop at nothing to get the book. Benton makes Trish the guardian of the book and tells her that she must protect it. Trish only just escapes from Kate and she asks the coven to take over. The coven refuse, telling Trish to fix her own mess. As a result, Trish is forced to turn to Aidan McCarthy, a warlock, for help. The problem is that Aidan hasn’t cast magic for years and Trish’s spell casting abilities are unreliable. Plus, Aidan has a secret agenda for the book. Will Trish be able to protect the book? Will she figure out Aidan’s secret agenda in time? How will she stand up to Kate, a powerful witch that can control the elements, when Trish’s own magic is practically non-existent?

The action kicked off as soon as the book began. It was barely a page or two before somebody died! It didn’t stop either, the action scenes kept coming. To be honest, I felt a little overwhelmed at first because there weren’t any slower moments for me to catch up. I think books often suffer from the opposite problem and I’d rather be overwhelmed than underwhelmed. After a while, the book settles down into a nice pace with frequent action but some slower moments too. This book is definitely a page turner. There really weren’t many, if any, places where I got bored or skim read.

One thing that was strange at the beginning was some of the descriptions of how Trish felt. I think the author tried to show the reader how Trish felt rather than tell the reader. For example, at one point, Trish starts burping, I think because she is nervous about facing the coven after what has happened to Benton, but it’s not clear. It’s just a little strange. It could be because the author is male and it’s something a man would do, but I think the first possibility is most likely. Luckily, there wasn’t much of this, well nothing else that stood out as much anyway.

Throughout the book, the magic was impressive. There was a nice range of magical abilities; from Rain, who can’t cast a single spell but can memorise everything she reads; to Trish, who’s magic is very unreliable and mostly doesn’t work; to Aidan, who is a powerful warlock but he hasn’t used his magic in years; to Kate, who is so powerful that she can control the elements (e.g., conjuring tornados, rain, ice etc…) I like the range because it made the action scenes more interesting. I do wish that Trish had demonstrated a little more magic as she is the main character, especially towards the end, but I think having Kate remain as this unbeatable force is realistic. A novice witch wouldn’t manage to beat a witch who has been honing her craft for years. I’m not sure whether Rain’s character was necessary though. She couldn’t cast any magic, only memorise the spells, so other than whispering spells to Trish, she doesn’t do much.

The author also incorporated some nice twists into the magic. For example, Trish casts a locating spell to find the ancient book. It seems like the spell hasn’t worked until Trish gets an overwhelming desire to get wasted on a specific bottle of wine. She heads into the kitchen and pushes the bottle of wine. It opens up a secret passage leading to a room that contains the book. There are others which I won’t include in the review because it would spoil the surprise. Overall, I was very impressed with the magic.

It is rare that the point of view (POV) shifts to the antagonist’s thoughts. I really liked that the reader saw things from Kate’s POV at times. She is an interesting character because she’s fairly psychotic throughout, yet she is redeemable. Kate has clearly been dealt a series of bad hands in life and it is easy to see how she has become the witch that she is. I also liked that she took care of herself and she had a snarky and sarcastic sense of humor. There are several moments in her POV where I laughed aloud.

The romance between Trish and Aidan started off really believable. They had an instant attraction to each other that was purely physical; they actually don’t like each other personally. I liked that they tried not to get distracted by each other but they weren’t always successful. The first time they kissed was completely out of the blue. They suddenly just went for it. The next time they did this, I was less impressed, especially because they’d been fighting and telling each other that they didn’t like each other just moments before. I guess it was because they were in a life and death situation, but it seemed unnecessary. I think the reason behind the sudden kisses in the book were because there really wasn’t any other time to kiss. The book was so action packed, if the kisses weren’t randomly thrown in, there wouldn’t have been an appropriate time.

While I liked the romance at first, they both started to whine about halfway through; Trish with self-doubt over her spell casting abilities and how she’d never live up to her mother; Aidan about how everyone will naturally make the wrong choice and people are inherently bad. They would take turns whining and soothing the other, only for the character to whine again about the same thing in the next chapter. This got old fast. I felt like a shrink listening to a couple help each other through their problems. Less of this would be had been better.

Lastly, I think the relationship progressed too much in such a short space of time. Everything happens over approximately 48 hours so I didn’t like what happened at the end of the book for Trish and Aidan’s relationship. This is pretty cryptic and I won’t say anymore, but I think you will understand what I mean when you read it.

Final Verdict: A fast-paced book filled with magic. If you like witches and magic, you’ll love this book.