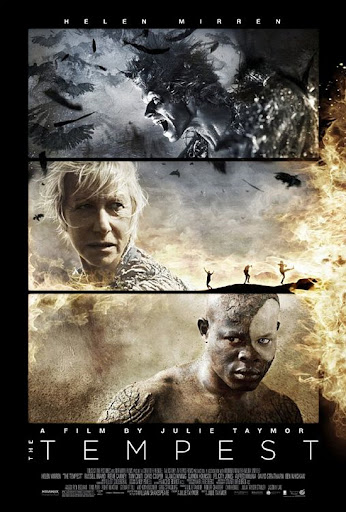 ‘Do you love me Master? No?’: Ariel
‘Dearly my delicate Ariel.’: Prospera
The Tempest, William Shakspeare

When I heard that there was going to be a movie made of The Tempest, one that would be staring Helen Mirren in the lead role, I was sold. I knew I would have to see the movie, and I knew I would like it. While I was unable to catch the movie in the cinema, when I finally was able to get my hands on a copy, I was impressed. While I have seen the ratings it has earned online, I think the movie is much better than those ratings would suggest (I wonder how familiar with the original text the reviewers were).

The play revolves around the magician Prospera. She was once the Duke of Milan, before she was supplanted by her brother, and she and her infant daughter were set out to sea in a little dingy. They landed on an almost deserted island. The years pass and when Miranda is a teenager, Prospera finds out that her brother, Antonio, and many of those who aided Antonio are just off the shore of Prospera’s island. Prospera raises a storm with her magic and the help of an indentured fairy, Ariel. Ariel safely deposits all the people about the islands in little groups, except for the King’s son, Ferdinand, who is on his own. Ferdinand and Miranda meet, and instantly fall in love, but Prospera wants to test Ferdinand and makes Ferdinand do some hard labor. Eventually Prospera reveals why she tested Ferdinand and gives him permission to marry Miranda. Meanwhile, Ariel is asked to torment two other groups of people. The first group is the King, Antonio, the King‘s brother (Sebastian), and an old faithful servant of Prospera’s. When Ariel puts the servant and the King to sleep, Antonio and Sebastian plot to kill the King, and have Sebastian take his place on the throne, just as Antonio took Prospera’s place. But Ariel intervenes and saves the King and the old servant. Later, Ariel comes back and reminds the three of their betrayal of Prospera, and they run around in a state of madness until Prospera begins to gather everyone to her cave at the end. The other group that Ariel torments is two drunkards who befriend the monster Caliban, a slave to Prospero. They all enjoy their alcohol and Caliban offers to serve them but they need to kill Prospera. Again Ariel steps in and convinces them that they are mad until Prospera gathers them to her cave. In the end Prospera greets everyone and convinces them she saved them all. The King having realized his guilt gives back Prospera her Dukedom. Prospera warns Antonio and Sebastian that they had better behave or she will turn them in for treason. Finally, Miranda and Ferdinand are both given permission to marry; Prospera breaks her magical staff, and frees Ariel.

The role of Prospero was changed specifically for Helen Mirren, and it worked. I think she was able to portray the wide range of intense emotions that Prospero experiences. She showed the anger and thirst for revenge upon those who had wronged her, the joy and sadness of her daughter falling in love and growing up, the affection for Ariel, and the disgust at Caliban. There were just a couple lines that had to be altered to fit the story, but it worked, and I think, brought a whole new depth to her character. The delivery of her lines was really impressive. I liked that Prospero’s famous last dialogue was kept in the movie in a way, with the lines spread throughout, but I would have preferred it at the end while the credits began to role.

I think one of the most unexpected aspects, at least to me, was the ability of Ben Whishaw to play Ariel. Ariel has always been one of my favorite characters, and can be portrayed in so many different ways. I had heard of Ben before, and everyone said he was a great actor, but I had not really paid that any mind. But honestly it is the truth; he is extremely versatile and believable. Since first seeing this movie, I had seen him portray Richard II in The Hollow Crown (A BBC production), and did not even realize it was the same actor! His Ariel is filmed in a variety of ways, with a variety of effects that match the scene. Most often he appears as a naked, genderless spirit, which shifts where he is constantly. Sometimes he will be in a pool of water, others floating in the wind, or as a spirit of fire. But his most impressive transformations are when he dresses as a water sprit and the harpy. In both of these scenes, small more feminine breasts are seamlessly attached to his torso turning him even more androgynous. Other times, Ariel appears as a mermaid spirit all in white, with the hint of a finned tail. Ben is able to sing and evoke old ideas of mermaids. But my favorite, is where Ariel transforms into the harpy. Again he is slightly more feminine looking, and he sports a massive pair of black wings. His skin has been painted all black, and his teeth and whole mouth are also black, and a pair of contacts complete the look. With the surreal background behind him when he says, “I have made you all Mad” it really does feel as if he has turned them mad. And the little movements he adds in this scene bring to mind a massive bird perching and looking at some worms!

The only real draw back to the casting are the young lovers. The characters of Miranda and Ferdinand are not that interesting to begin with in the play, but in the movie they were a bit annoying. Reeve Carney who plays Ferdinand is one of the most feminine men I have ever seen (think more feminine than Jared Leto), and while I usually like this, it did not fit with my image of Ferdinand. And when he sings to Miranda (which I think the song is from Twelfth Night and not The Tempest), it is cringe inducing.

The world that has been chosen as the setting for the movie is brilliant. There are the extremes that are mentioned in the dialogue. The island feels large enough to make it believable that the different groups could wander for a long time without seeing each other. The effects used to show the magic were also well done, and fit the feel of the movie.

Overall, I really enjoyed the movie, and it may have helped improve my feeling towards The Tempest. But I think I will be fast forwarding through all the romance bits in the future!

Final Verdict: A must see if you are a fan of Shakespeare, or a nice way to first test the waters with the Bard!