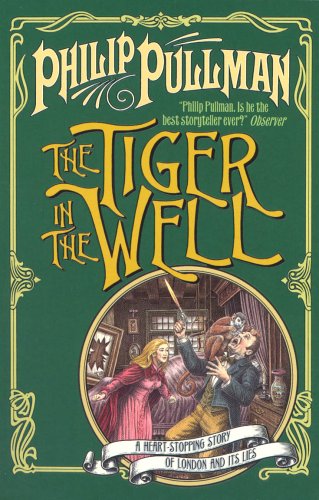 “Tyger! Tyger! burning bright
In the forests of the night,
What immortal hand or eye
Dare frame thy fearful symmetry?”
The Tyger by William Blake

If you have not read the previous Sally Lockhart books, and do not want any spoilers for the other books, please stop reading here. There are big plot twists from the last book that are the starting point for the novel. This is your only warning!

It took me a while to pick up this book. After the ending of the previous book, I was not sure I would want to continue on to the next book; I am not a fan of reading books where the main characters are parents. I find that many of the plots involved then require the parents to move heaven and hell to save their babies, and I really didn’t want to read that. Also, I knew that this was the last book in the series where Sally is the main character (and I wasn’t really ready to say goodbye to her). But I needed something to listen to while walking into work in the mornings, so I thought I would give the book a chance, and I am glad I did.

It has been about 3 years since the end of the previous book. Sally has had a daughter, named Harriet. They live with Webster and Jim in a country house, with space for the camera stuff, and Sally’s financial business has been expanded. Things are going well, too well, and when things start going wrong there is no break until the end of the story. Sally receives divorce papers from a man she has never met, and worst of all he wants custody of Harriet. The attack is well planned as Webster, Jim, and Charles are unreachable in South America, and cannot come to her aid. As preposterous as the claims are, it will be hard for Sally as she is a woman living a socially unacceptable life in 1881. As things develop, Sally realizes that this trap has been a long time in the works, and that all her options are running out. While all this is happening, the Jewish community is being targeted by a shadowy figure called the Tzaddik. While one powerful journalist (Goldberg) tries to unravel the mystery of the Tzaddik, his path will cross with Sally’s. Will Sally be able to prove her side of the story and keep Harriet safe? And what does the Tzaddik and the persecution of the Jews have to do with her?

I think of the three Sally Lockhart books I have listened to, this was my least favorite. While I liked the story, it was just so much darker than the other two, so much so I had to take breaks from it. It is not until almost the end that anything goes in Sally’s favor. One of the reasons it is so much darker is that Jim is missing for almost all the book. In the two previous books, he brings a little bit of humor to the situation. I missed him a lot.

There was a lot to like though with this story. It feels like Pullman pulled out all the stops for this story, and it feels a bit like the end of a trilogy. There are so many things from the historical context that Pullman has artfully pulled in; the two main points being the plight of the Jewish people of Europe, and the rise of socialism. Both bring out how tough life in 1881 was for many people. There are parts that are heartbreaking, and infuriating.

One of the things I love about the whole Sally Lockhart series is the strength of the characters, especially the female ones. Sally is an extremely unconventional woman for her time, and at times that works against her, but she doesn’t compromise on who she is. Around her other strong characters appear and support her. The new characters that are introduced in this story are a lot of fun. There is Sally’s new business partner, a woman named Margret, who is really smart and like Sally working and earning her own money (rather than relying on a man). They have a secretary who is also a woman, and Sally’s loyal nurse for Harriet.

The most dynamic new character though is Daniel Goldberg. He is Jewish, socialist, and a leader. People from both communities look to him for guidance, and he is a force of nature. In the story he draws people’s attention and as a reader he does the same. He can also be a man of action when he needs to as well. There is a scene where he stops a street riot with a story. As Sally thinks, here is a man that is finally the equal to Sally!

While I liked Fredrick, I never really liked him and Sally, so I did not really miss him in this story. Instead, I think Goldberg is a better match to Sally, and brings out the best in her. But don’t let this lead you wrong, there is almost no romance in this story.

The actual mystery in this story is, I think, the weakest of the three books so far. I knew from the end of the first book who the villain was going to be, but it took Sally forever. Luckily Pullman addresses part of that, with Sally saying she never wanted to admit that she knew who was behind this trap. Luckily, there are some new assistants to the villain, and at least one is truly horrific.

Final Verdict: A good continuation of the series. But be prepared for a pretty depressing book, until the last few chapters!