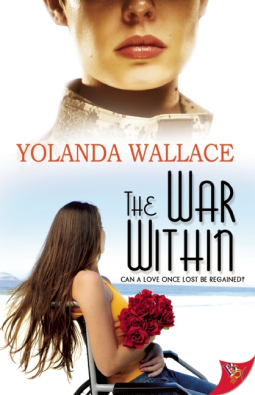 The plot of The War Within is split between the present and a retelling of events during the Vietnam War. Meredith Moser was an Army nurse in Vietnam, which is where she met Natalie Robinson. They were two of the best and bravest, and they fell in love with each other. However, it was not an easy time to love another woman, and Meredith chose to marry an Army mechanic that she also loved (he just wasn’t the love of her life). She got the chance to be a wife and mother like she had always dreamed of, and 47 years later she finds herself on summer vacation with her granddaughter, Jordan. Meredith, now a widow, realizes that they are headed for Natalie’s hometown, and she can’t stop wondering if they could have a second chance. Jordan is surprised to find out that the grandfather she loved dearly wasn’t her grandmother’s love, but she and her grandmother share something in common—Jordan dates women. However, her most recent girlfriend dumps her over the phone claiming that Jordan is too shallow. Jordan realizes that she is a little lost right now: she isn’t sure what she wants to major in at University, and where she stands on some major issues (she likes to participate in protests). The last thing she was expecting was to find her eye caught by Tatum, a wheel-chair bound war veteran. Can grandmother and granddaughter find love in the same small town? Is there a possibility for second-chances in love?

I requested this book from Net Galley in preparation for attending the Bold Stroke Books Festival in Nottingham, England, as I had only read two books from that publisher. I was able to read an excerpt of the story before requesting (you can access this here). By chance I requested another book with a lesbian relationship and military at the same time (Taking Fire by Radclyffe). I thought that Taking Fire would be my favorite of the two books; however, this book blew me away, and it was the clear winner!

I absolutely loved this book, especially with how it showed that love is not always clear-cut. There are different degrees of love, different abilities to love, and there are choices involved. Both Meredith and Jordan face choices in their love lies, and they each have to weigh the social stigmas and what they want in life against love. The book really showed that sometimes there are sacrifices that need to be made to achieve what you want!

I really loved the flashbacks which showed the historical lesbians, but it was hard for me to remember it wasn’t WWII (as my only previous readings of lesbians serving in the military during a war is from WWII). The Vietnam War made an excellent background for the story as it is historical, but not so far in the past. However, for me there was a timing issue that made me forget that it wasn’t WWII; Vietnam is a tight fit for the family spacing of Meredith and Jordan, but there are just enough years for it to work (my family has generation gaps closer to Natalie and Tatum, where there is a university aged person and an aunt/uncle that served in Vietnam rather than a grandparent). While I am not as familiar with the Vietnam War, the horrors of it and the good parts (the camaraderie, and the new chances) were fascinating to read about. It really struck me how awful the war was with what Meredith, Natalie, and the other nurses faced, especially holding hands and listening to the dying. However, the most poignant historical aspect was the danger of living when a rumor could end everything.

The story was really helped by the strength of the main characters, Meredith, Natalie, and Tatum. I had a little trouble relating to Jordan, especially as I expected to have a lot in common with her. However, she really grew up in the course of the story. It was really interesting to see her come to terms with being attracted to a woman in a wheelchair. While I was a little disappointed that the wheelchair factored into her decisions (“I don’t know. I’ve never thought about it, but I like to think I would be dating the person, not the disability.”), I thought it was rather mature of her to consider the consequences before she really pursued Tatum. Mostly Jordan made a great foil to her grandmother Meredith. Jordan is able to show how times have changed and that the fact that she is attracted to women is not seen as such a big deal, but that love is still never easy.

Meredith, the younger one from the war, but she was brave in that she never shied away from scary things, whether that was helping trauma victims or figuring out her sexuality. While her choice of George over Natalie (“Your grandfather was a good man and the best friend I’ve ever had, but he wasn’t the love of my life”) sort of broke my heart, I can understand her wanting to follow the goals that she has held her whole life (being a wife and mother). I respect that she made her decision and didn’t drag the whole thing out, which is what many stories would have done.

The character that I really related to was Natalie. She was unable and unwilling to hide who she was, but she would protect others (like Meredith) from having to live the life she did. The descriptions of her were fascinating: “The kind of women you don’t want to hang around with unless you’re looking for a dishonorable discharge. The kind that usually gets weeded out after the men in white coats play Twenty Questions during the recruiting process.” I really respect her ability to forgive Meredith for the choice she made; I don’t know that I would have handled the love of my life waltzing back into my life 40 years later and wanting a second chance.

I was surprised that I liked George so much. I didn’t expect from the story summary to like him, and even though he wasn’t actually in very much of the book, I really liked him. It was clear why Meredith loved him, and why Natalie respected and befriended him. He was unlike the other military men, and kept Natalie’s secrets and protected Meredith. Honestly, I would have loved a little more about George, especially his friendship with Natalie. I think it was fascinating that Natalie mentions that she and George “have a bad habit of being attracted to the same woman.” Yet unlike other love triangles, they respected Meredith, and allowed her to make her choice and didn’t fight each other over her. Instead, they both loved Meredith enough to just want whatever she wanted. It was refreshing.

Honestly I was cheering for all of the characters at the end, and didn’t want the book to end. There was a surprise bit at the end that I really appreciated, and honestly I didn’t see it coming. I can’t wait to re-read this book. There was just so much about the book that really resonated with me.

Final Verdict: A surprisingly good read that keeps you hooked until the very end and cheering for all the characters.