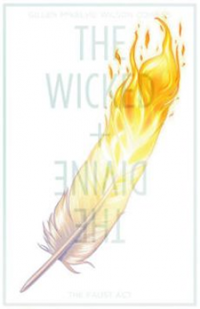 “It’s not that I’m afraid my parents wouldn’t approve. I’m afraid they would. I want this to be all mine. Amaterasu’s only been around for a couple of weeks. How many of these girls have even seen her?”
Laura in The Wicked + The Divine, Vol. 1: The Faust Act by Kieron Gillen and Jamie Mckelvie

The basic premise of The Wicked + The Divine is that every 90 years some humans turn into various gods, from many different mythologies and religions. They reach pop star like status; some love them and others hate and mistrust them. However, it is also understood that none of them ever live longer than two years. In this collection of issues we mostly follow a fan of several of the gods, Laura, as she gets to meet and interact with her idols.

To be honest I can’t really give a better summary of the plot as it was a bit all over the place. There are some stories that you reach the end of and you cannot really say what happened or if you understand anything, but you know you liked it. That was what The Wicked + The Divine was for me. The first thing, and the thing that pops up several times in my notes that I took while reading was, “I have no idea what is happening.” It is easy to follow Laura and what she is doing, but the wider picture is still very obscure, but I like the ideas that are involved.

The most striking feature though has to be the art. It is really amazing and draws the reader in. Often comics feel like they were designed in black and white and then hastily colored in. The Wicked + The Divine almost every frame feels like a piece of art, and I cannot remember one ugly panel in the whole book. Often when you are reading the start of a new comic series it is hard to tell everyone apart, yet the artwork in this means that you won’t mistake anyone for anyone else (now that doesn’t mean you will know who they are, just that they are not someone else!).

As for the characters I enjoyed Laura, but in this first collection of issues the main star has to be Lucifer, who is a striking blonde. I loved her, and wished she was in even more of the panels than she was. I also had fun trying to figure out who all the gods were, and what country/mythology/religion they came from. I ended up on Google trying to figure some of them out, and for me that is something I loved about the story.

Overall, if you don’t mind not completely understanding what is going on, give this a shot. I especially enjoyed where this collection ended, and am looking forward to reading the next collection of issues. I feel it is too soon to say if this is one of my favorites, but it has the potential to be a series I really love.

Final Verdict: A beautiful comic with a plot you may not always follow, but is intriguing and leaving you wanting to know what happens next.