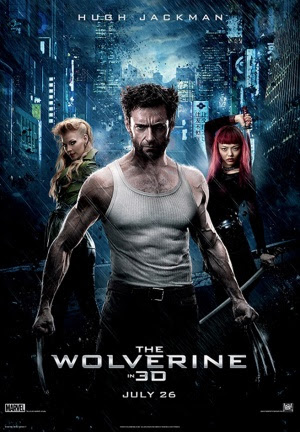 Yukio: “I’ve been trying to find you for over a year. My employer’s dying, he wants to thank you for saving his life. It’s an honour to meet the Wolverine.”
Logan: “That’s not who I am anymore.”
The Wolverine

The Wolverine is the latest edition to the X-Men franchise and the second film with focusing solely on the Wolverine (Logan). At the start of The Wolverine, Logan is living alone, high up in a mountain in the Yukon. He is tormented while he sleeps by visions of Jean Grey whom he was forced to kill at the end of X-Men: The Last Stand (the third in the X-Men trilogy) because he was the only one who would get close enough to her. He fears that everyone he comes in contact with will die at his hands so he is no longer the Wolverine, answering only to Logan. A mysterious woman appears and asks Logan to travel to Tokyo so that her master, Yashida, can say goodbye. When Logan arrives in Tokyo he finds that Yashida has another, more sinister dying request. Logan refuses the request and prepares to return to the USA. Yashida dies that night and Logan attends the funeral where Yashida’s granddaughter, Mariko, and the heir to Yashida’s empire is kidnapped. Logan chases the kidnappers and rescues Mariko, but his wounds aren’t healing. Logan and Mariko hide out in a safe house, but the kidnappers are close on their trail. Why do they want to kidnap Mariko? Can Logan keep Mariko safe or will he have to become the Wolverine again? Is Mariko even safe around Logan?

Overall, I think this is the weakest movie in the X-Men franchise. The story-line was too predictable. I guessed who the main bad-guy was going to be before anything had really happened in the movie and what the big showdown at the end of the movie was going to be. Everything in between also followed a typical kidnapping script. For example, Mariko is repeatedly hunted down and taken only for Logan to rescue her, until finally, he is caught off guard. Mariko, despite being excellent with a sword, plays the helpless woman who is dragged off while calling for Logan to save her. The other bad-guys involved in Mariko’s kidnapping were too obvious, too; there wasn’t one bad-guy—male or female—that wasn’t obvious. There weren’t even any double agents. Then, there is the romance. From the moment Logan and Mariko meet, it is obvious that something will happen between them. Nothing surprised me throughout the movie. I think there were too many not-so-subtle hints that made the upcoming plot points obvious. The predictable plot made the movie boring for me. If I had not been in the cinema, I think I would have watched something else or at least have been browsing the internet at the same time.

I have to say, first of all, that the special effects at the start of the movie were terrible. There is a scene where Wolverine is walking down the mountain in the Yukon. On his journey he sees a bear. This is clearly CGI. A few scenes later, Logan finds the bear has been shot with a poisoned arrow. The CGI of the bear is awful. It was so clearly CGI and the movements were really fake. I don’t see how this scene was necessary to the movie, so why include it? Seriously, the bear’s actions were laughably bad.

There was too much of Jean Grey throughout the movie. Obviously, Logan is distraught for killing Jean, so I expected The Wolverine to show Logan dealing with his role in her death. I just didn’t want so much of it. I expected this to be a small sub-plot but really this was a main plot point. There are so many dreams of Logan waking up next to Jean, with Jean telling Logan how he is a danger to everyone. I think the script writers laboured the point. It all just felt rather odd because Logan loved Jean, but they were never in a relationship so to dream as if they were in a relationship seemed odd. Also, Jean really left Logan no choice because she would have destroyed everything. I think a little less guilt and more simply grief would have been better.

I was not impressed with the mutants in this movie. The movies in the X-Men franchise always have multiple mutants with different abilities. In The Wolverine, aside from Wolverine, there are only two mutants. Yukio, the mysterious woman who brings Logan to Tokyo, has the ability to see how people are going to die. And, Dr. Green/Viper is like a snake, shedding skin and being immune to toxins. Yukio’s ability doesn’t play a pivotal role in the movie. It’s almost like this was added to increase the mutants in the movie. Dr. Green is interesting, but honestly, the shedding of skin is kind of gross to watch. The acting of Dr. Green was also fairly stiff. I didn’t like how she was so perfectly made-up in short dresses and high-heels. It didn’t really seem to fit in with the rest of the movie. That might have been the point, but I wasn’t a fan of the styling of the character. I know that The Wolverine is separate from the X-Men trilogy, but I expected to see more mutants. This is something I love about the X-Men franchise and I found it to be lacking in The Wolverine.

I enjoyed the Japanese culture throughout the movie. I liked seeing traditional and modern dress, as well as other Japanese traditions. The fighting was different and it was interesting to see Logan react to that. At times, I did feel a little overwhelmed by the number of fight scenes because of the fast pace and the similarity between them. Overall, I liked the change in culture and tone of the movie. It was refreshing.

The ending of the movie really bothered me. I’ve written a separate, hidden post about the ending specifically. Of course, this will include spoilers, so only click on the link if you are okay with spoilers or have already seen the movie. Click this link to read my thoughts on the ending The Wolverine Ending.

Final Verdict: Not recommended unless the movie is free on TV, or if you really like Hugh Jackman without his shirt on.