As seen in Stratford-Upon-Avon, England
Written by William Shakespeare
26 May 2013 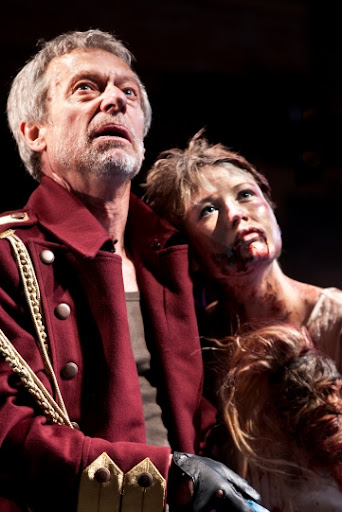 “You heavy people, circle me about,
That I may turn me to each one of you,
And swear unto my soul to right your wrongs.
The vow is made. Come, brother, take a head;
And in this hand the other I will bear.
Lavinia, thou shalt be employ’d: these arms!
Bear thou my hand, sweet wench, between thy teeth.”
Titus in Titus Andronicus by William Shakespeare

Titus Andronicus is one of the few Shakespeare’s plays that I have not yet read. All I knew of it when I bought my tickets was that it was not often performed, it had something to do with a pie, and someone had their hands cut off. Obviously I was a little surprised when I read the play before seeing it. There was a lot of bloodshed and death in it, and at the end very few people are left alive. I was excited to see how this would be performed.

The play follows the miseries that fall upon the Andronicus family due to Titus’ actions. The play starts with Titus returning from a successful 10 year campaign against the Goths. Titus goes to bury his latest sons that have died and in keeping with Roman customs, sacrifices the eldest son of the Queen of Goths (Tamora), despite her pleas for mercy. When the throne of Roman is offered to Titus, he turns it down and decides to support Saturninus, the eldest son of the previous emperor, over his younger brother Bassianus. Saturninus announces that he will marry Lavinia, Titus’ daughter, everyone but Titus refuses as Bassianus and Lavinia are already betrothed. This leads to Titus killing one of his sons while trying to get Lavinia to marry Saturninus, and in the end Saturninus is displeased by the ruckus, and decides to marry Tamora instead. She convinces Saturninus to spare the Andronicus family, while secretly promising Saturninus that they will have their revenge. Relieved, Titus promises to take the new emperor hunting the next day.

The lover of Tamora, Aaron (a Moor) helps Tamora’s two remaining sons settle an argument over who loves (or pines) Lavinia more, by convincing them to rape her in the woods. The next day the hunt sets off. Lavinia and Bassianus stumble across Tamora and Aaron, and deduce that the new empress is committing adultery, but before they can report it, Tamora’s sons kill Bassianus and drag Lavinia off to rape her, despite her pleas to Tamora to kill her. Aaron, having fled the scene, frames two of Titus’ sons for Bassianus’ murder and they are sentenced to death. Lavinia is found in the woods by her uncle (Titus’ brother, Marcus), her tongue and hands having been removed. Titus pleas for his sons’ release, but his last son (Lucius) is banished for attempting to free his brothers. At that moment they find out what has happened to Lavinia. Aaron then tricks Titus into cutting off his own hand in an attempt to free his sons.

Sometime later, they figure out how to let Lavinia write, and she writes out that it was Tamora’s sons that raped and mutilated her, and Titus swears revenge. Titus, by faking madness, is able to kill Tamora’s sons. Titus’ son, Lucius has raised an army with the Goths to march on Rome, and Saturninus has arranged a meeting at Titus’ to try and stop a war. When everyone arrives, Titus is dressed as a chef, and serves a pie. He asks Saturninus if he would kill his daughter if she has been raped, and when Saturninus agrees, Titus kills Lavinia. When Titus then accuses Tamora’s son of having raped Lavinia, the sons are called for, but Titus says they are already there, and everyone realizes they were the meat in the pie Titus served. Then a bunch of murders leave Lucius to lead Rome at the end.

While the play sounds a bit complicated, it is actually fairly easy to follow. The actual plot progression reminds me of an old Greek Tragedy, where the stories happen really quickly, but unlike the old style the action does happen on stage. I did enjoy the play, but it was very bloody.

I will admit that I did not have the best seat in the place, and I spent most of the play peering around a post (which is not listed as obstructed view for some reason). However, the use of the stage was very well done. It is a smaller stage, but they used every inch of it. There were two walk ways through the audience and a balcony behind the main stage. There was one main trapdoor in the center that could be lowered to create a pit, or raised for a dais. My favorite part of the stage though was the use of the vertical space. Many of the dead were lifted by their ankles to dangle in the air, before finding their resting place among the tech walkways above. It was a great use of the space and a convenient way to get the bodies off stage.

Usually I prefer period costumes or a unique take on things, but I liked the costumes in this. There were some modern elements and some ancient. The Romans retuning from war were in great red leather chest pieces with the iconic roman leather-strip skirt (Pteruges). The Goths had more of nomadic or even post-apocalyptic style; there was leather, fur, and metal grommets. However, the best was Tamora and her eldest son. They both sported tattoos reminiscent of the ancient Celts, and Tamora rocked some great adapted Mohawks. When we saw the Goths the first time (not the Queen and her sons), they came on rocking out to some drums, and I would have loved more of them in the play! The Romans’ everyday wear was pretty modern with hints of other cultures outside of Western influences (the pajamas of the Andronicus family appear almost Asian). One thing I did like was that the only one in the whole play to wear white was Lavinia, and on top of that she started the play with brilliant, almost white long hair (which is cut off to bind her wrists after her hands are cut off).

There were a couple of costume things I was not fond of in the play. While most of the costumes were great, there was a painful scene where the new emperor sits in a bath and talks. I thought he might have been wearing something under the bubbles, but then he stood and got dressed in a robe. While he was attempting to cover himself, he had a lot of trouble getting into his robe, and that scene seemed to take forever. The second thing I didn’t like was that everyone (besides Titus and the women) wore suits in the final scene. This sounds ok at first, except that I could not tell who was who in the final fight, and I still had no idea which side anyone was on after the fight.

One thing that has troubled me in a handful of plays by the RSC is there is sometimes a scene of seemingly gratuitous sexual violence against a woman, and this play also has this issue. When Aaron stabs the nurse, after she brought his and Tamora’s baby to Aaron, I knew she was going to die. However, as she is dyeing Aaron then stabbed her pointedly in the butt/genital area. I know he is supposed to be a very evil man, but it seemed over the top.

The main thing that bothered me with this play though was two actors’ voices. The first was one of Tamora’s sons. His voice was so grating that I was happy to see him dead at the end because then I knew he didn’t have any more lines. Both boys had been younger than I was expecting, and were annoying more than dark or evil. The bigger issue with voice came from Aaron. I really liked the actor and I thought he did a good job, but his accent really put me off. It sounded a bit like a Scouse(Liverpool) accent being put on by Sean Connery. His “S” sounds were all “SH” and I could not pay attention to his speeches. It really took me out of the play. I have no idea if that is the actors actual accent or not, but it was hard to associate the most evil man with that voice! But both voices that I disliked gave one of the best exchanges in all of Titus Andronicus!

“Demetrius: Villain, what hast thou done?
Aaron: That which thou canst not undo.
Chiron: Thou hast undone our mother.
Aaron: Villain, I have done thy mother.”

The final scene was my favorite scene; where the dinner is happening in Titus’ house. It struck me as more over the top than sad or scary, and a lot of the audience had a good giggle over it. I don’ t know if that was the effect the director was going for, but I liked that it made the last scene easier to get through. It started off on a different foot when Titus entered dressed like a French Maid; in the script it just calls for him to be dressed as a chef. Then when he reveals that the boys are baked in the pie, Tamora took one more agonizing bite of the pie (don’t ask me why), and after she does everything broke apart. Titus stabbed Tamora, and she ran around stage shooting fake blood from her wound for a while. Then the Emperor stabs Titus with what looks like a table leg, and that is left sticking in him as he collapses against the table. Then everyone started stabbing everyone else, and it was a complete melee. It seemed to get out of hand a bit, because Tamora lost part of her wig, so there was a random clump of hair mixed with all the blood (and her gold head jewelry was broken and she had to hold it together during bows). I couldn’t focus when the scene drew towards the close and Lucius began to speak, because the “dead” bodies were distracting. So many of them were obviously breathing that I didn’t know who was really “dead” and who was just injured. However, my favorites were two of the extras. One died spread-eagle on his back and the other then died, face down on the first’s crotch. I have no idea why, since there was a whole stage and two wings to die on, and it made me giggle until the end. Luckily, after the speaking, they cleared the stage, and the last image was of Lucius’ son holding Aaron and Tamora’s son, and holding a sharp cake server. I loved the ambiguity of that final image, and the idea that the violence might not actually be over.

Final Verdict: A very bloody play that is quick and relatively easy to follow. Not one for the kids, but a good day out at the theatre.