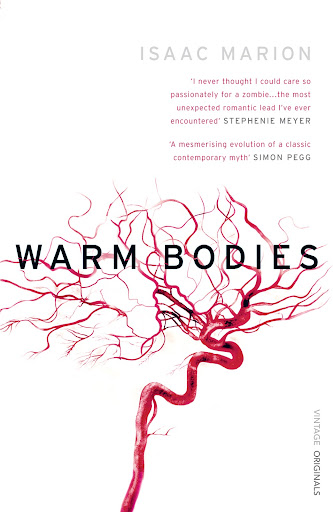 “There is no benchmark for how life’s ‘supposed’ to happen, Perry. There is no ideal world for you to wait around for. The world is always just what it is now, and it’s up to you how you respond to it.”
Mr. Kelvin, Warm Bodies by Isaac Marion

After seeing the movie adaptation of Warm Bodies, I could not get my hands on the book fast enough (I had been on the waiting list for the library since way before seeing the movie). I was super excited when the book arrived just in time for some long train journeys around the UK. I think I finished the book in a day and a half.

The background to the plot in this book is that there has been some event that has devastated the world, and a large number of the humans have been turned into zombies. Our narrator is R, and he is a zombie, but he is not like the rest of the undead around him. He still attempts to talk, and has a best friend named M. However, on one trip for food, he eats a man’s brain and sees parts of the man’s life (it happens for all the zombies when they eat a brain, and they treat them a bit like a drug), and starts to feel something for the girl the man was dating, Julie. R saves Julie from the other zombies, and takes her back to the airport where he lives. He tries to make it clear he is going to keep her safe, but she is clearly scared of him. But over time Julie starts to trust R, and R slowly becomes a bit more human. But what can the future possibly hold for the two of them? Where can humans and zombies possibly live together?

I have to say my first feelings about reading this book were surprise. I hadn’t realized how different from the movie version of R was to the book version of R. In the book, R was probably an office worker because he has a smart suit. In fact, he is rather proud of his bright red tie. However, in the movie he seems to have been a bit younger when he died, and more likely a student or unemployed because of his red hoodie. I know it seems like a small point, but it comes up several times about how R is dressed, so it was not something that you could just forget.

By itself, the book is very novel. My brother read it right after me, and loved it, but he had not seen the movie. I had trouble because I was constantly comparing it to the movie, and I liked the movie better for the most part. The basic story that the movie and the book share is very neat. I can’t remember another book or movie where zombies can turn more human-like.

One of the most interesting parts of the novel that is never really shown in the movie is the zombie culture. They are not randomly wandering in the novel. Instead, the boneys (the fleshless thing zombies will eventually become when they are no longer human) run a sort of culture. There are pairings, raising children, some sort of religion, and even an enforcement of not fraternizing with the humans. I love this part because it put a completely different spin on the boneys and gave the story so much more depth.

I think overall I was a bit disappointed with the book after watching the movie. In the movie, R is much funnier. Frances and I were constantly laughing in the movie, whereas I don’t really remember laughing during the book. It is a much bleaker story, with more of the horror of a zombie movie. The ending was also different, and I think I liked the more straightforward movie version. Don’t get me wrong, this is still a very good book.

Final Verdict: A good book that is a quick read. But if you had to choose, go with the movie! 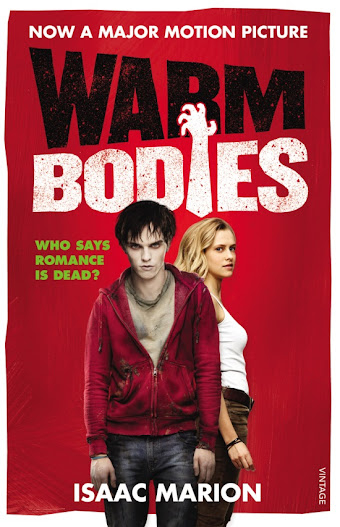 “My friend “M” says the irony of being a zombie is that everything is funny, but you can’t smile, because your lips have rotted off”
R, Warm Bodies by Isaac Marion

I first saw the movie adaptation of this book and I loved it! I found the sarcasm of R really entertaining and the movie felt pretty original. I decided to read the book because the general rule is that books are better. I have to say that overall, I was a little disappointed in the book. I think that is because the movie is a pretty close adaptation of the book without some of the details, which slowed the pace anyway. That meant there wasn’t anything new in the book so the events didn’t have the same impact as they did in the movie. I think if I had read the book first, I would have loved reading it.

I really liked R’s and Julie’s characters. R’s difficulty with communicating was well written without being irritating and the increase in his speech happened slowly enough to be realistic. I found his use of music to communicate to be interesting. Sometimes, I felt that the book focused a little too much on what was going on in R’s head, but considering he couldn’t communicate very well, the author didn’t have much choice. Although, I did like the fact that it took R time to put together what was happening to him because he couldn’t think at the same rate as humans, this did go on a little long. Julie was brilliant. I liked how strong she was. She tried to escape a few times even though she is surrounded by the dead. She also had a rather quick wit which I found entertaining. I think that R and Julie were well portrayed in the movie. Julie remaining fairly true to the movie, but R was changed. I liked the changes that were made to R’s character, making him younger and more similar to Julie.

I liked the connection between Perry and R in the book. When R eats Perry’s brains, he sees Perry’s memories as a child, as a teenager, as he falls in love with Julie, as the World turns from bad to worse and how Perry loses the will to fight in the end. When R attacks and kills him, Perry welcomes it. Initially, I didn’t like Perry. He seemed quite mean, but the more I learned, the more I understood and liked him. R killing Perry freed him from a life he no longer wanted. R continues to see Perry’s memories and talk to Perry long after R has consumed all of Perry’s brain. That shouldn’t be possible, which makes the communication much more interesting. I still wonder whether the conversations were all in R’s brain, a manifestation of the changes his brain was experiencing, or whether the conversations were real. About two thirds of the way through the book, I did begin to get a little bored of the conversations between R and Perry. Some of the memories didn’t really add anything to the plot and slowed down the pace. There is one point where R hears lots of voices from all the people who died (I’m not sure if they are only the ones he killed or others), which isn’t really explained. In the movie, R sees Perry’s memories and communicates with Perry a little, but not to the same extent. As a result, Perry is a rather unlikeable character, especially because the fact that Perry wanted to die was not emphasised in the movie. Having said that, limiting the communication did increase the pace of the movie, and was used only to provide an insight into what happened and the relationship between Julie and Perry.

I liked the zombie community in the book. Rather than just being senseless undead beings that only want to kill, these zombies have a hierarchy with the Boneys (fleshless zombies who lose what’s left of their humanity) in charge, relationships of a sort, religion, law and order. This gave a new take on zombies, ones who aren’t as dead as other portrayals of zombies. I liked these elements but there was a little too much, particularly at the beginning of the book. I wanted the story to move a little faster and learning all about the zombie community slowed the pace. I think a little less would have captured my interest in the community without detracting from the pace. Or, maybe if this background information had been important at the end somehow.

The pace picked up in the middle of the book, where R and Julie spend time together at the airport and they escape when the Boneys try to separate R from Julie because humans and zombies are not allowed to mix. Once R gets inside the humans’ camp, however, the pace slows again. There were some really long-winded chapters that didn’t really advance the plot and felt unnecessary. For example, there was a trip to the graveyard, a trip to a bar to have a drink of juice, which Julie spikes, and a trip to Perry’s home. I really didn’t enjoy these parts of the book as much. I wanted the story to push forward.

Final Verdict: Overall a page turner that suffers from a few issues with pacing.