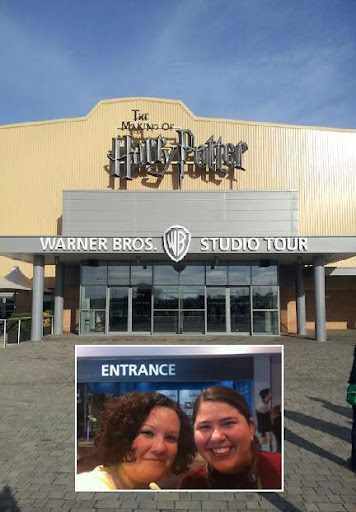 “The stories we love best do live in us forever, so whether you come back by page or by the big screen, Hogwarts will always be there to welcome you home.”
J.K. Rowling

For both of us and many of our friends, visiting Hogwarts has always been an unattainable dream. But while we cannot find a magical castle hidden from all muggles, we were able to finally go see the next best thing, the Harry Potter Studio tour. This journey actually started almost 10 months earlier when Frances bough Lynne a ticket for her birthday. But due to our busy schedules we were not able to book a visit until almost the end of summer, and by then we realized it would probably be less crowded if we went during the autumn. So we booked for a Tuesday morning, and decided to brave rush hour train traffic to get there.

We had a brief scare on the way to the Studio Tour when Frances was unable to find her tickets. But after some wonderful customer service we were on our way again. In a time when trains are more unreliable than reliable, our train was on time, and we arrived in Watford Junction with enough time to grab some lunch. Just when we were starting to wonder how we would recognize the bus to take us to the tour, we saw a double-decker bus covered in Harry Potter images. A video played on our short trip, and the excitement really started to hit us. Just as the video ended, we pulled up in sight of the large studio building, and between the three large Wizard’s Chess pieces and the banners. We had finally arrived.

While getting our actual tickets and then taking pictures with the chess pieces, we had our first indication as to how magical the place truly was. The two women who helped us were so friendly and happy to give us tips for exploring the tour, that we knew they were our sort of people. When we entered the front doors, we found the handprints of the main three actors from the final movie. And found out that Lynne has about the same sized hands as Emma Watson; while Frances has more Daniel Radcliffe sized hands (so still rather small, as he is not very tall). Then we made it to the main hall, and were finally surrounded by everything Harry Potter. There were banners from all the movies and with a wide variety of the actors spread around the walls, the Ford Anglia and several other props hung from the ceilings. The gift shop was beckoning us in, but we resisted choosing to savor that moment at the end. But we dropped off our extra bags at the cloakroom, and picked up the audio tour device (an extra £4.50, but absolutely a must for the tour!). Then we waited in a short holding area to really start the tour, and got pictures of the cupboard under the stairs, and a pair of Harry’s glasses.

We will try not to reveal too many secrets here, and stick with everything that is known to the public. But we apologize in advance if we accidently say just a little too much!

The first thing we did was wander into a room with different posters from all the movies. These screens then turned into a video of the producers talking about how they first stumbled across the book and then wanted to turn it into a movie. From there we were ushered into a large theater, where we were treated to an introduction by the main three actors (as themselves and not their characters). They mentioned about how special this place is to them, as it is where they grew up, and that they formed a family with everyone there. Then we made our way to the doors of the Great Hall, and they tricked us with where the doors where! It was at that point that it really hit us; we were where all the movies had really been made (for the most part).

There is almost nothing like entering the Great Hall. The memories from the book, and the first view in the first movie, do not prepare you for standing there in that moment. We had a tour guide, just for this one room, but neither of us paid much attention. Instead we were free to wander and take as many pictures as we could. There were some example costumes from all the Houses, and at least one Ghost! There were a couple of the tables laid out with the place settings for a feast before all the food arrives. There is so much detail in everything, so much that even if you watch all the movies carefully, you would never have noticed. At the very front were some of the costumes of some of the main Professors, and just behind them stood the large holders of all the House Points. It was at this point that we were reminded that while all the staff were wonderful and happy to be there, not all the people in the Hall were, as when Lynne accidentally wandered into someone’s picture, she was cursed at. But we just ignored the sourpuss and took as much time as we could in the Great Hall, only moving on to the rest of Studio J when another tour group entered the Great Hall.

The rest of Studio J is where the main portion of your time will be spent and the main sets and props are. Right after leaving the Main Hall, we started our audio tours. The audio tour has more information about all the props, directors, sets, everything. Each section starts with an introduction by Tom Felton. Then there are several videos and sometimes behind the scenes pictures. There is so much extra information in these bits, that we have no idea what the tour would have been like without them. These videos helped us take our time, and really appreciate every little thing. We watched many people and different tour groups pass us, but we had been reminded many times to go our own pace, so we did.

The props are laid out in little clusters and there are signs explaining some of the information about them. There are stops for more information about the different directors, costumes, makeup, food, animals, and so much about props and sets. There is also a stop about some of the special effects, and about the education of the wizards and the actors! When you have questions ask the attendants, they are all knowledgeable, and seem to love their jobs. When we asked them what certain things were (when we could not decide where exactly they came from) they answered, gave more information, and did not make us feel silly for not knowing.

One of the neat things is there is a small stop where you can try some green screen magic. In this, you are allowed to go in, try on a robe, and sit on a broom. This is one of 3 places you cannot take pictures, but they do allow you to buy pictures if you want (something like £12.00). It was a great experience, even if you don’t buy the picture (as we did not).

After you finish with Studio J, you exit into the backlot (they will warn you, you will not be able to go back into J Lot once you leave). The backlot has some of the larger pieces on display, the ones that would not fit indoors. But there is also the special treat of being able to buy a butterbeer, and some light snacks. It was nice to finally sit down, and enjoy a snack. While the butterbeer was nothing special, it was fun to try (think more on par with Creame Soda than beer!). There were some great bits that you could sit in the prop and take a picture (our only clue as to what is out there).

Then you enter the third and final bit of the tour. This is the section that there is the least amount of information about, and we won’t reveal too much. But you get to wander the animatronics lab and see some of the most impressive props. There are some that you would not have even realized were animatronics if you have not wandered the lab. From there you wander down to Diagon Alley, which is suitably impressive. It was so fun to peak into the windows, and think about when Harry wandered this street. From there you see a bit more from behind the scenes. And then you reach the most impressive bit, but it is the most secret part. We cannot reveal what it is exactly, but Lynne is willing to admit it brought a tear to her eye to behold it!

The tour ends in the shop, and there was plenty to tempt you in the shop. However, we found things to be rather over priced (more so than we had expected). But there are some really neat gifts in there, and some things from the actual movie that you can buy. But by the point we made it into the shop we had spent 5 hours wandering in the tour.

As we prepared to head back to the train, we were again impressed with the customer service. As we turned in our audio tours and collected our things, all the works wanted to know if we had enjoyed ourselves, and how fun it had been! We both mentioned that it seemed to be a great place to work, as everyone seemed to happy working there (and not the fake type of happy like at Disney World!).

Overall, it was an amazing day. Any true fan will be impressed and awed by all that is made available to us. Even for the casual fan and the newest convert it will be impressive. It would be a great day out for teens and up. There were not many hands on things to make it an ideal place for kids, in fact, it seems best served for a more mature audience. But if your kid is a fan, it will be a great day out!

Final Verdict: Run to the phone and book your tickets now. Then push all the families and little kids out of the way to get to the front of the line!