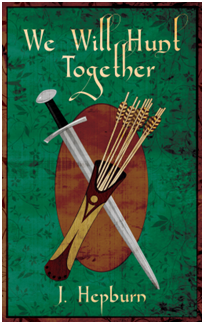 “It occurred to Helgaer then, with perfect clarity, that they would be finding ways to argue until they fell asleep or one of them kissed the other.”
We Will Hunt Together by J. Hepburn

The plot of We Will Hunt Together follows Helgaer as she tried to track down the men that murdered her lover. However, she ran into bandits along the way and was badly wounded, and only survived due to the intervention of Camille, a foreign hunter who ran away from her past. Camille takes Helgaer to her cabin to recover, and the two women begin to grow close, but will Helgaer’s quest to avenge her former lover drive them apart, and will they even survive the final fight?

This is my third lesbian book from Less Than Three Press, and it falls somewhere in the middle of the other two, as I loved one (The Only Way by Jamie Sullivan) and disliked the other (Circus Escape by Lillian Rose)! I am a big fan of Less Than Three Press’s gay literature, and when I saw a summary that included two women who know how to fight with weapons, I requested it immediately from Net Galley.

Overall, I enjoyed the book. It is the most adult book of the three lesbian books that I have read from Less Than Three Press, with scenes of a sexual nature happening. However, it was also the most adult in how the relationship was handled, and I really liked that (I’ll discuss that more below). There were even elements that I always wonder about in adventure stories, like mentioning that the characters do actually pee.

The relationship between the two characters was one of the strengths of the story. It was such a relief to me that the characters did not immediately love or even like each other; in fact they didn’t trust each other. Instead they had to slowly build everything between them, even conversation. Then the characters realize that they are attracted to each other, but even then they are not sure what the “relationship” between them means. I found this so refreshing from all the Young Adult novels that I have been reading, where everything is undying love at first sight. The ambiguity worked, and felt very realistic. Lines like, “Come back alive and you can stay here for a while” really brought out that the characters cared, but that it was still early days in their relationship. They also each come with baggage from their previous relationships, and, again, I rather liked this, and how they worked through the issues.

Another strength of Hepburn’s story is the subtle world building. The world is introduced slowly, but there is a complete picture by the end. Sometimes with fantasy or Sci-Fi novels I find that the world building is so overwhelming at first that it takes me a while to get into the story, but Hepburn handled it really well. The best way that the world building was shown was the difference in the backgrounds and attitudes of Helgaer and Camille. Both women are jealous of the other’s body type, and have different reasons for dressing and fighting at as they do.

Probably my favourite part of the book though had to be the final fight. I was worried about how it was going to go right up until it happened. The two women had a great plan, and while it didn’t work perfectly it worked out! Hepburn didn’t make them super-powered of completely invincible, but had them play to their strengths.

The book wasn’t without its faults. The biggest issue I had was that there were some conversations and exchanges where I had no idea who was saying what. This was especially difficult when they first met and were sharing back stories. It wasn’t until much later I figured out which story went with which woman (I thought Helgaer was the one who ran from home instead of being the one looking for revenge). I understand that it is difficult with two females, but a few more clues or names were really needed. The other issue I had with the book is that I didn’t really like either of the two leads. While I liked them together, and admired their skills, neither was that likeable to me. Some of this may just have been how gruff and sexual they were, which is very different from me, so I had trouble relating. However, I was still rooting for them in the big fight.

Final Verdict: A decent book, with some good sword fights and a believable relationship, but only for adult readers.