“During afternoon tea, there’s a shift in the air. A bone trembling chill that tells you she’s there. There are those who believe the whole town is cursed – but the house in the marsh is by far worst. What she wants is unknown, but she always comes back. The specter of darkness: The Woman in Black.”
From the Woman in Black Trailer, Director James Watkins

After missing out on seeing Daniel Radcliffe at the London premiere of Harry Potter and the Deathly Hallows, Part 2, we couldn’t turn down tickets to see Daniel Radcliffe introduce his new movie, The Woman in Black! Lynne scooped FRONT ROW tickets at the Odeon theatre in Leicester Square, the very theatre where the premier was watched by all the actors just over six months ago. We all know which actors would have sat on the front row then!

On route to London, we chatted out how close we would be to Daniel Radcliffe. We thought we’d be close, but we didn’t dream of how close we would actually be. So, we arrive at the very hectic theatre, where many fans were dressed up. We headed to our front row seats and realize just how little space there was between us and the screen. Surely, Daniel Radcliffe wouldn’t stand that close to use, right? It was barely a few meters away. To our amazement he did! You could actually see our shadows on the photographs that we took.

The director introduced Daniel Radcliffe. To be honest, we couldn’t tell you what he said. We were too damned excited to see Daniel Radcliffe. When he casually walked to the front of the theatre and stood within a few strides of us, we were struck by how little he is. We knew he was short, but he’s also fairly slight, especially in the preppy look. As Lynne likes to tell people, he is practically pocket sized 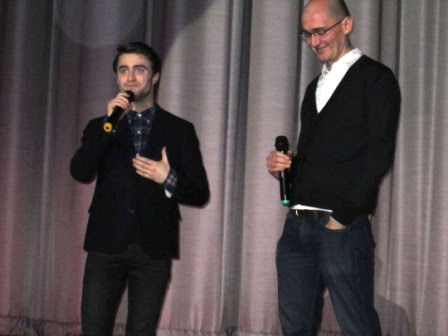 While both of us are rather fuzzy on what was actually said, it was only about 5 minutes of talking so not much was actually said. Mostly it was both the director and Daniel talking about how proud they were of the film. They both hoped that we would enjoy it, and not be too scared. There were no questions or answers. Just an introduction and as quickly as he appeared, he disappeared.

The lights went down and we settled back into our seats to watch the movie. Right before the movie started a woman dressed in a black hood walked in front of the screen, right where Daniel had been. It was a bit unsettling to say the least. The movie itself was brilliant! We are fans of traditional ghost stories though, so if you are expecting a scary movie that rivals the likes of Paranormal Activity, you’ll be sorely upset. The beauty of The Woman in Black is in the suspense that is created, and the perfectly timed events that scare you out of your seat! We only have one complaint—the number of shrieks in the audience. As we have already mentioned, it wasn’t terrifyingly scary, not enough to scream and dive under blankets as the girls next to us did. Sometimes, we weren’t sure whether the audience was screaming or whether it was part of the movie.

Final Verdict: If Daniel Radcliffe introduces another one of his films, you’ll have to fight us for front row tickets, put it that way.