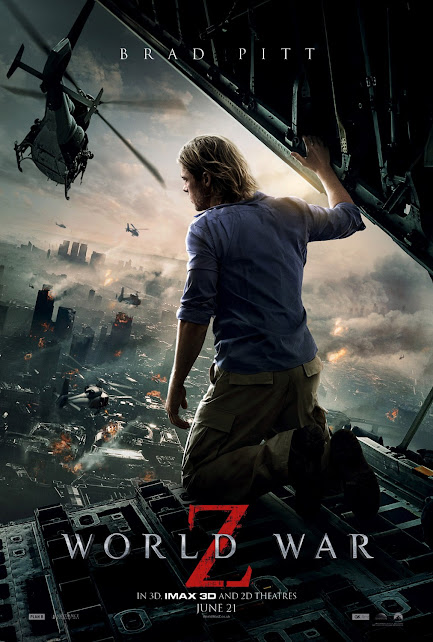 “Mother Nature is a serial killer. She wants to get caught, she leaves bread crumbs, she leaves clues… Mother nature knows how to disguise her weakness as strength.”
Andrew Fassbach (a virologist) in World War Z

When I saw the first trailer for World War Z, I knew I would see the movie and read the novel. Upon finishing the novel by Max Brooks, I was excited to see the movie, as the novel had been great. Against my usual reservations my friend and I saw it in 3d.

The movie starts after the beginning of a strange outbreak, Gerry Lane, his wife and two daughters are packing to leave the city. However, there is awful traffic, and then people start running. More people are chasing the first wave, only when they catch someone, they bite and eat parts of them. Gerry and his family run, and just make it away, and after some more trouble, make it to a military controlled boat (after having added an orphaned boy to their family). The military asks Gerry to take up his old job as a United Nations Investigator and help a scientist try to find the source of this outbreak. All major cities have fallen, and no country is doing well. Only after his family is threatened does Gerry agree. He must set out and find the cause of this undead outbreak, and if he can, clues towards a cure. Will he survive, will he find the answers, and will his family be safe?

My first comment has to be a warning. If you get motion sickness easily, this movie is not for you. A lot of the chase scenes are very jumpy and chaotic, and seeing it in 3D did not help. Normally I have no trouble with this, but this one did bother me a bit. Luckily towards the end, things settle down and there are some great long shots without the jumping around. The other warning is that this was more of a horror film and less of an action movie than I had been expecting, but there was still plenty of action.

Overall, I enjoyed the film. I like most of the changes to the plot, which make it more of a coherent story. In the book, the story is told through interviews which are recorded 10 years after the initial zombie outbreak, and only hint at certain plot points. Parts of the movie are rather terrifying, such as where do you run to for safety. I love that the film shows some of the worst of humanity and some of the best. When another family opens their apartment to Gerry and his family, they are putting themselves at risk, but it was a wonderful act of kindness.

The best part for me was Brad Pitt. He was amazing in his role, and I really could believe that he was Gerry. The style of clothing and the fierce protection of his family just reminded me so much of what we see of Brad Pitt in real life. However, the cool and determined actions of Gerry, in the worst of chaos, work. They show how he can survive, when so many others can’t, and how he is the only one that could solve this problem. He also has a way of inspiring those around him, as he is the only one that seems to know what he is doing. It was great to see him be able to connect to people from all over the world and walks of life. In the midst of a terrible apocalypse, he is able to help a young female solider during a medical emergency, and yet before moving off, he kisses her forehead like a father (even though he is only a little older than her, but it was what she needed).

I liked the two major females in the movie. There is Gerry’s wife, Karin, who was actually a pretty strong female lead. During the beginning, Karin is able to keep up with Gerry and doesn’t hold up the process, instead she just grabs the children and the flares! However, once she is left on the ship, she does some less intelligent things. She actually endangers Gerry’s life at one point. I found it hard to believe that Karin would have put Gerry into that danger after he’s already been in similar situations so many times before. My favorite female character though was Segen, the young Israeli solider. She faces some horrible odds and situations, but pushes through. She is strong and never complains about what life has brought her, and she is the only one able to keep up with Gerry in heavily infested zombie areas. She has a great shoot first attitude that works well in this apocalyptic setting.

As far as the novel is considered, I liked most of the changes to the film, and I loved the homage to the novel. The biggest difference is that the zombies in this movie are much faster than in the novel, in the novel you can outrun them, but it is their numbers that are so dangerous. The addition of finding the source is new, but I felt it gave the movie a direction that was missing from the novel. The references to the books were seen in things like a nuclear explosion, that, from the book, I know it was India and Pakistan fighting. There was also the soldiers calling the zombies, ‘zeeks’ or ‘z-heads’, like in the books. I was a little upset at the change with the Israeli walled city, especially what happens as Gerry leaves it, but it does make the movie so much more exciting. I also missed that the zombies could walk out of the oceans anywhere, but there weren’t really any scenes to see that.

So while it was a bit rough to watch at parts with the movement, I really liked this movie. The zombies are realistic and terrifying. The idea at the end is ingenious and I loved it (especially one scene of Brad Pitt at the end is wonderful!)

Final Verdict: A scary movie, that if you have a stomach that can withstand motion sickness, it is definitely worth a watch!