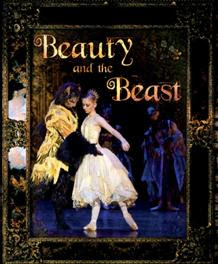 “‘Yes, yes,’ said the Beast, ‘my heart is good, but still I am a monster.’
‘Among mankind,’ says Beauty, ‘there are many that deserve that name more than you, and I prefer you, just as you are, to those, who, under a human form, hide a treacherous, corrupt, and ungrateful heart.’”
Beauty and the Beast by Jeanne-Marie Le Prince de Beaumont

The Birmingham Royal Ballet performed Beauty and the Beast at the Birmingham Hippodrome in September 2011. The ballet was split into two acts. In the first act, the story begins at Belle’s father’s home. The bailiffs appear and take away the furniture that is on stage. An officer appears and informs Belle’s father that one of his ships has been found. He asks all three daughters what they would like before he leaves. Belle’s two sisters ask for gowns and jewelry, while Belle asks only for a rose. Belle’s father gets lost on his return in a storm, and is chased by brigands. He takes shelter at the Beast’s mansion and is waited on by invisible beings. In the morning, Belle’s father picks a rose as he leaves the mansion. The Beast appears and demands one of the man’s daughters in return for sparing his life. Belle’s father breaks the news to Belle when he returns home. At the end of the first act, Belle is delivered to the Beast as the clock strikes nine.

In the second act, the story continues several months later. The Beast has arranged a ball and the invisible beings that served her father are there. They appear in the form of animals, too. At the end of the ball the Beast asks Belle to marry him. She kindly refuses and the Beast lets Belle return to her father. He gives her a rose and tells her that she much return before it dies or else he will die also. Belle returns home and her sisters make her stay so she can attend the one sister’s wedding. Belle returns to the castle and finds the Beast at Death’s door. Belle admits that she loves him and agrees to marry him. The transformation from Beast to Prince occurs as the curse is lifted. The end.

The costumes for the entire production were beautifully made and very detailed. For example, the raven outfits were black leotards with see through veil falling over the top and down past the knees. The Ravens also wore headdresses that had a beak on the front. The best costumes were worn by Belle and the Beast, of course. The ball scene where they each wear gold outfits was stunning. Belle wore a gold ball gown that fell just below the knees and gold ballet shoes. She also had a gold tiara on her head to complete the look. The Beast worse a gold coat which had fur sleeves. We were sat fairly far from the stage, so we couldn’t see the detail of the Beast’s mask with the naked eye. We looked in the booklet, however, and it is impressive. It’s very realistic and pretty scary to look at.

The highlight of the performance was when the Beast transformed into the Prince. The ballet dancer slipped behind a billowing fabric that the animal servants were holding and changed into the Prince’s outfit. We were surprised that the ballet dancer managed this considering how extensive the Beast costume is. We liked that this was done on stage though, because if the dancer had left the stage and returned it wouldn’t have been as magical.

Finally, we would just like to comment on Belle’s sisters. They danced brilliantly and were fairly comical. We laughed a few times during their scenes. The faces they pulled and their over the top characters added a lightheartedness to the ballet. They always dressed in matching outfit too, which were generally pastel colours and again over the top. We enjoyed watching them dance and they added more to the ballet than the sisters add to the original Beauty and the Beast story.

Final Verdict: If you like Beauty and the Beast, you have to see this at least once in your lifetime.