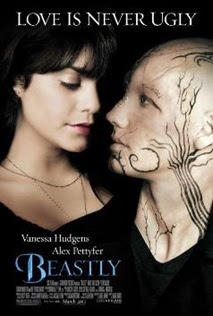 “You have a year to make someone love you, or stay like this for ever.”
Kendra in Beastly

Beastly is the movie adaptation of Beastly by Alex Flinn, a re-telling of Beauty and the Beast with a modern twist. The movie follows Kyle Kingsbury, a high school student who has it all. He is good looking and popular. He has an ugly personality though and is often seen publically picking on students whom he considers to be lacking in the looks department. This back fires when he picks on a witch. The witch, Kendra, puts a spell on Kyle that takes away his looks, leaving him bald, tattooed and scarred. Kendra gives Kyle a year to fall in love with someone, and only the words, “I love you,” will free him from the spell. Can Kyle change in a year, or will he remain a beast forever?

I think that Alex Pettyfer, who played Kyle Kingsbury, did a good job of portraying Kyle’s personal growth (not the physical transformation). Pettyfer conveys the cocky, arrogant side of Kyle so well that it is easy to dislike Kyle at the start of the movie. As a viewer, you want Kendra to punish Kyle so that he can learn looks aren’t everything. As Kyle (now known as Hunter) begins to learn that looks aren’t everything and he stops trying to emulate his father (Kyle often says the same phrases as his father about looks being important, for example, “people like people who look good” at the beginning of the movie), he grows into himself. He learns that someone who isn’t beautiful on the outside can be beautiful on the inside. It’s nice to watch Pettyfer act this transformation, and he manages to portray the vulnerable and desperate side of Kyle/Hunter’s character well. It is in these scenes where the viewer roots for Kyle/Hunter to find love and beat the spell. It’s kind of an odd experience: to go from wanting the spell to be cast on Kyle/Hunter, to wanting Kyle/Hunter to break the curse.

I thought Mary-Kate Olsen, who played Kendra, was good. Kendra was a big part of the book because she cast the spell, but her presence is felt more in the movie. I love how Olsen acts Kendra. Her facial expressions and body language are great. These unnatural movements really convey ‘witch’ to the audience. I liked the Kendra’s style as well. Her outfits are all black and gothic in places. I also love how her hairstyle changed; one minute she had long blonde hair, the next a short black bob with a fringe (bangs), and the next blonde hair with black streaks in it. I do wish that the movie had kept one aspect of Kendra’s character though. In the book, Kendra disguises herself as someone who is overweight and unattractive to make Kyle pick on her. When he does, she transforms back into a beautiful witch and casts the spell. I would have thought this would have been good to include because in the movie Kyle essentially picks on someone who is pretty but has a tattoo on her face and dresses a little eccentrically. While people are picked on for how they dress in every-day life, I think that the way it was done in the book worked better.

I have to admit that I wasn’t keen on Vanessa Hudgens, who played Lindy. I think that she managed to convey the outspoken side of Lindy’s character okay, but I don’t think she gave much range in the movie. She was kind of flat in comparison to rest of the actors’ performances. Also, in the book, Lindy is fairly average looking with red hair, green eyes and crooked teeth. This couldn’t have been more different from Lindy, who was actually prettier than Kyle/Hunter’s popular girlfriend at the start of the movie. This made it less believable that Kyle/Hunter was able to see past looks and fall in love with someone for who they are inside.

I thought that Neil Patrick Harris, who played the blind tutor, Will, was amazing! He stole the show, to be honest. His witty one-liners kept me laughing throughout the movie. For example, at one point when Will is throwing darts and hitting the dart board every time, Kyle/Hunter asks, “How do you do that?” Will replies, “I went to this dance and an emo chick gave me a dart hex.”

There are some key changes to the plot that I didn’t like. I’m only going to talk about a few in this review, but there are a lot more than this. The main change is that rather than turning into a literal beast like in traditional versions of Beauty and the Beast, Kyle/Hunter has head to toe tattoos and scars. I think the film was trying to pull from something Kyle/Hunter says in the book, “…if there´s a beast, maybe he´s just a regular guy with a skin condition or something.” It is true that people are judged by how they looked, and if they don’t conform to what is thought of as beautiful they are treated as a ‘beast’ in a sense, through social exclusion and ridicule.

The problem I have is that I don’t think the movie thought it through properly. In a way, the movie confirms that this is ugly, especially as Kyle/Hunter complains about how ugly he is and how no one will ever love him like that. When he is loved, he turns back into his good-looking self. I don’t think this is a good message for the young audience the movie was aimed at. It essentially taught them that people with tattoos and scars are ugly. I guess it’s sort of a problem with the original Beauty and the Beast story too, because the Beast turns back into a handsome prince. I think because the transformation is so different from anything you would find in reality, it isn’t so bad, but as there are many people with extensive scars and/or tattoos, I don’t think this was an appropriate choice. I certainly don’t see any problem with Kyle/Hunter walking around, undisguised once he is transformed. I think Lindy’s lack of reaction says it all.

The only thing I did like about Kyle/Hunter’s transformation was the tattoo of a tree that Kendra placed on Kyle/Hunter’s arm. The tree changed with the seasons; flowering in Spring and Summer, leaves falling from the tree in Autumn, and the tree lit-up like a Christmas tree in Winter. I enjoyed these animations and I thought it was a good way of showing the progression of time in the movie.

Aside from Kyle/Hunter’s transformation, I also didn’t like the fact that after Kyle/Hunter rescues Lindy from a confrontation between her father and a criminal, Kyle/Hunter demands that her father bring Lindy to him else he would send incriminating pictures of him to the police. Essentially, Kyle/Hunter kidnaps Lindy. This is different to the book in which Lindy’s father offers Lindy freely in exchange for his life. I find the former much more uncomfortable, especially as Kyle/Hunter has been stalking Lindy (hence why he knew she was in trouble at that exact moment).

I also didn’t like that Lindy liked Kyle right from the beginning of the movie, despite his less than appealing personality. She also didn’t really seem to dislike Kyle/Hunter. The only thing she did dislike was the fact that she was essentially being kept prisoner. In the book, Lindy doesn’t like that she is a prisoner and she doesn’t like Kyle/Hunter for keeping her a prisoner. As a result, her feelings for Kyle/Hunter develop much slower and it takes time for her to see that Kyle/Hunter is changing into a better person. In the movie, however, Lindy seems to like Kyle/Hunter straight away. I think this happened because Kyle/Hunter completes his personal growth before Lindy even moves in. I think the fact that Lindy is the person who helps Kyle/Hunter transform in the book and yet this is left out of the movie was not a good choice. It makes Kyle/Hunter’s transformation into a better person less believable because it happens over such a short time and he has no help.

The ending was completely different and I didn’t like it. In the movie, Lindy phones Kyle/Hunter but doesn’t really try to get back to him. It is Kyle/Hunter who seeks out Lindy at school before she goes to France. The ending in the book is much better than this, and truer to the original Beauty and the Beast.

Final Verdict: I would read the book rather than watch the movie.