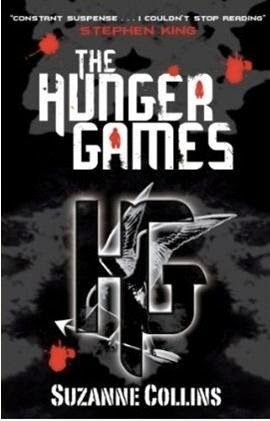 “Happy Hunger Games! And may the odds be ever in your favor.”
Effie Trinket, The Hunger Games by Suzanne Collins

The Hunger Games by Suzanne Collins is hands down my favourite book. I actually found this book through Lynne. She had talked about the book non-stop while she had read it earlier in the year. I had really liked the sound of it and I’d made a note to read it. For one reason or another, I didn’t get around to reading it until Christmas. I settled in to read it after Boxing Day. I didn’t couldn’t put the book down, and read until the early hours of the morning. “Didn’t” wouldn’t be accurate because I tried to put it down. I’d just end up picking it back up within a few minutes to continue the story. There just wasn’t any natural place to put this book down. It is non-stop action from start to finish!

I also think that the strength of Katniss’ character appealed to me. She is tough and although she doesn’t want to kill anyone, she will if it comes down to her life or theirs. She also doesn’t lose sight of what her aim is—which is to survive because her family needs her—when a romance of sorts occurs. There are too many fantasy books that have weak female characters that are dependent on a male character to save them. Also, too often in novels the female characters fall in love and forget everything else. In this book, Katniss remembers that she has a responsibility to her family and she lets nothing get in the way of her survival. While Katniss could be criticized for how she led Peeta on during The Hunger Games, she did it so she could live. Wouldn’t we all do the same if our lives were on the line?

The book is violent, but I don’t think it is inappropriately violent. It’s just enough to keep you hooked and to give the reader mixed feelings of hope, despair, and horror. These are the very emotions that the characters feel in The Hunger Games, and that’s needed so you understand the true horror of The Hunger Games. This book has been criticized for the level of violence considering it is a young adult book. I think that young adults are more than capable of reading this book and enjoying it without becoming scarred. I think we need to give young adults a little more credit. There are so many movies that are rated a 12 or a 15 (USA equivalent is roughly PG13) that young adults can go and see that are MUCH more violent than The Hunger Games. I’ll name just a few of the top US grossing horror movies (according to IMDB), which are all rated suitable for 12 or 15: Paranormal Activity, Silent Hill, The Ring, The Grudge, The Cabin in the Woods, Scream franchise, The Final Destination franchise…need I go on? In fact, I have seen some of these horror movies, and at 24 years old, they can still give me nightmares! So, why can young adults cope with violent movies that they can see happening, and not a book, which isn’t even as violent? I like the fact that The Hunger Games isn’t toned down. It treats young adults as just that, young adults. Also, there doesn’t seem to be many reviewers suggesting the Twilight trilogy should be censored by parents! This is potentially more damaging in my eyes because it teaches young female adults to be weak and dependent on men. In the second book, New Moon, Bella actually passes several months of her life like a robot, just because Edward has left. She also puts herself in life threatening situations just so she can hallucinate and see his face! Then, when he returns, she instantly forgives him for leaving. When I have children, I know which book I am giving them to read. I know which female character is the better role model.

I found the publicized element of the Hunger Games eye opening. Since reading the book, I am actually disgusted by reality TV shows. Take The X Factor (UK version) which is on TV at the moment. The contestants are continuously humiliated in the papers. For example, Lucy Spraggan has been in the news for being a lesbian, and Jahmene Douglas has been in the news because his dad went to prison for abusing his mum. I actually dread seeing Rylan Clark perform purely because Gary Barlow’s comments make me uncomfortable. He is so harsh, and doesn’t just criticize the contestant on his singing ability alone! We seem to relish in reading these kinds of things. For example, I haven’t stopped watching the show! It’s a strange paradox where people find something like The X Factor entertaining partly for those reasons. I actually commented recently that the show is lacking since Simon Cowell left because he used to tear the acts a new one. Also, the contestant’s appearances always change for the live shows, and they seem to act differently to try and attract more supporters. In the first week of The X Factor, for example, James wore eye-liner, which really didn’t suit him and wasn’t something he’d worn on the original audition. This is all too similar to how Katniss is dressed up and paraded around. Plus, when Peeta (the other contestant from District Twelve) admits on live TV that he’s in love with Katniss, and the ratings soar, they are soon known as the Star Crossed Lovers and they are told to play to the cameras. In fact, their mentor only sends valuable aid to Katniss when she kisses Peeta, and plays her role.

Final Verdict: Take a day off school or work to read this. You’ll need it.