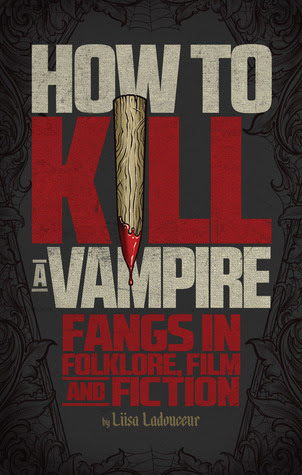 “I also think the contemporary vampire still has a part to play in our understanding of and acceptance of our own deaths. In an increasingly secular society, where fewer of us believe in an afterlife, the vampire provides escapism from the harsh reality that we will one day, all too soon, be switched off. What if there was another option? Not life. Not death. But undeath. And not that stinking, shuffling, mindless zombie undeath either. A sophisticated undeath. An undeath that includes love.”
How to Kill a Vampire by Liisa Ladouceur

While browsing on NetGalley, I saw the title of this book, and saw who the author was, and I was clicking the request button before I could even full process my actions fully. I am a huge fan of facts about vampires, and have actually read several books looking into their history in fiction, literature, and even the possible scientific/biological reasons that gave rise to vampires (i.e., why bodies may have looked like they had been feeding). I liked some of these reference books, but others were almost painful to get through. I recognized the author’s unusual first name, Liisa, from Encyclopedia Gothica, a book that has been sitting on my to-read list for a long time! I honestly could not wait to start reading this book!

There is no real way to summarize this book, as it is non-fiction. However, Ladouceur sets out in a sensible progression through the vampire lore. She starts with why she worked on this book and that vampires are part of popular culture. Then she presents some of the science and history, and brings in the popular media progressions. Then we make it to how to actually kill vampires, the weapons, and who the famous slayers were. Then it ends with some thoughts on the prevalence of suicide in vampire legends.

I really loved that the book starts with quotes from Bela Lugosi, and “Bela Lugosi’s Dead” by Bauhaus (song lyrics for those not familiar with this Gothic classic), as it set the stage for a truly gothic experience of vampire history. Also, I really appreciated the note that the book is not exhaustive about the history of the vampire, and that the author focused on where she was more comfortable, and is willing to be contacted about suggestions.

Parts of this book feel very personal, and it almost feels as if one of your really excited friends is relating what they have found out to you, in the hope that you will be just as excited. I appreciated that she did not take the opportunity to lie about what her first real vampire love was, and even comments that if she were one of the cool kids, it would have started with Dracula by Bram Stoker, but it wasn’t! There are also some really beautiful prosaic moments that really make you think about the legends and the implications. These moments really kept my interest, and my favorite quote can be found below! 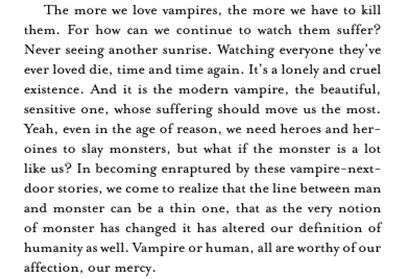 The strength of this book has to be in the author focusing on her strength areas within the research, but still giving wider background. It was nice to have an unabashed Gothic influence to the novel, and I would be lying if I said I hadn’t been listening to some Bauhaus, Sisters of Mercy, and The Cure. I really enjoyed that the book focused on the films and some novels. Ladouceur also has some really neat ideas about how love relates to the legends, and ultimately to a duty of humans to end a vampire’s life and suffering. However, the most unique part was the focus on famous slayers. This is something that I have not seen in the other reference books.

There were just a couple things I was not a fan of. Overall, the book just feels too short, and even in the briefness of the book some facts are repeated. It felt like she anticipated people reading random sections, with no acknowledgement that she had already touched on some of the topics and novels/movies. The other repetition that really bothered me personally was with Twilight. Now, I acknowledge that it should be in there, and should be talked about as it has had an impact (for better or worse) on vampires. What bothered me though was the phrases used to introduce it every time, such as: “the motherlode of all modern vampire stories” or “beyond-bestselling.” Every single introduction of Twilight went something like that, and as someone who really dislikes the series it really grated on me. I fear that as her target audience seems to be more of the old-school vampire fans rather than the Twilight fans so this may annoy other readers as well. Luckily, I can forgive this, as she does mention how problematic Edward and Bella’s relationship is!

Overall, this was a nice short read, which works great for people who just want a taster for what is out there on vampires. Even in its brevity, I learned new things about vampires. Best of all there are some great lists of movies, novels, and historical sources for further readings, which really helps this book work as a first stepping stone into becoming a vampire expert!

Final Verdict: A great introduction to the lore and popular media representation of vampires, with a nice focus on killing the bloodsuckers!