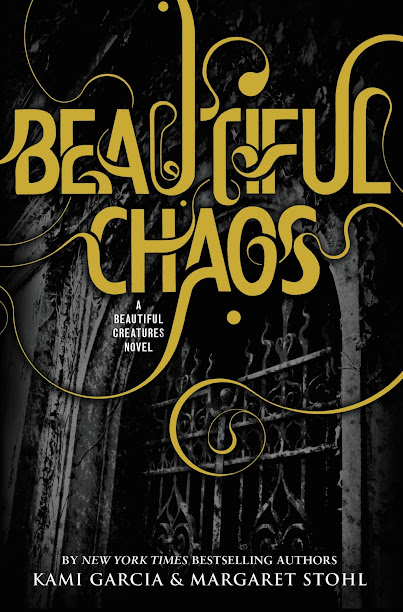 “The Mortal world is in a state of beautiful chaos and destruction, which will lead to an exquisite end.”
Sarafine in Beautiful Chaos by Kami Garcia & Margaret Stohl

I will admit that the first two books in The Caster Chronicles were books that I had gone into with trepidation, and dragged my feet to actually read. However, Beautiful Chaos was honestly the first one that I was looking forward to. I knew the plot had to change and break new ground.

As with other books in series, I will not be able to talk about this book without some spoilers from the previous two books. So if you do not wish to spoil those two books you probably shouldn’t read on.

At the end of Beautiful Darkness, Lena claimed herself as both light and dark, and thus she broke the order of both the mortal and caster worlds. The book starts several months later, and Gatlin is suffering; it is really hot, there have been a plague of grasshoppers, and it looks like the start of the apocalypse. Link is still adjusting to being part incubus after the bite from John Breed, who is still missing. All the casters’ powers are on the fritz, and they are having trouble controlling them. At the same time Ethan is finding himself changing, forgetting things that he shouldn’t, hearing a voice, seeing things in the mirror, and even his taste in foods is different. When he confesses to Amma she reacts badly and visits New Orleans, with Ethan and Link following her. Ethan and Lena try to figure out how to save Gatlin and the world, but keep coming across something about the wheel of fate, and “the one who is two.” Sarafine and Abraham Ravenwood are also trying to find John Breed, and are clearly up to something. Can Lena and Ethan save the world again? And if they can, what is the price that they will have to pay?

While the previous two books have focused a bit more on the female characters, this book is the boys’ book. Ethan, Link, John Breed, Macon, and Abraham Ravenwood are the characters who take the center stage in this book, and I enjoyed it. However, don’t think that the women step back too much. The main vision/memories in this book concern Sarafine before she killed Lena’s father. Ridley also has a lot to deal with as she adjusts to being mortal; and you can be sure that she does not take having to go to Gatlin High School well. I was a bit disappointed that Liv, who had become one of my favorites, was really not in the book much. She and John Breed are important at the end, but we actually see very little of them.

As far as the plot went, I liked that it was more interesting than the previous two books. The story wasn’t just focused on Lena, but the whole Gatlin contingent. While there were parts that I was able to easily guess, other parts took me by surprise. For me though, the best part was that Lena was not nearly as depressing as the previous two books, and she is also not as important to the plot. Ethan really gets to step forward, but not always for the best. He is the one that has to face some really tough consequences and pay for loving the caster that has broken the world.

In the previous books, I had trouble connecting with any of the characters or really feeling emotionally invested in their lives. In this book though, I really felt for Ethan in several scenes. There is an especially overwhelming moment when parts of Gatlin are destroyed by sheers released by Abraham in response to Ethan being unable to say where John Breed is. Ethan sees the library at least half destroyed, but worse is his great aunts’ house. Half of it is completely destroyed, and Aunt Prue is left horrifically injured and in a coma. I felt bad for Ethan as it felt like he was responsible for those closest to him suffering but there was nothing else he could have done. I really liked Aunt Prue and Marian, and it was hard to watch them suffer.

The one thing that really angered me about this book was that the previous book had ruined one of the major plot points. At the end of Beautiful Darkness we see the Ridley has John Breed in her control, so there is no mystery in this book as to where he is. The rest of the characters are clueless, and I would have preferred being surprised by where he was. Beautiful Darkness was the only book in the series to give a preview like that, and I really hated it!

Overall, I think this is my favorite book of the series. The focus on Ethan helps the plot move along, and it engaged me much more emotionally than the previous two books However, I can’t really say anything really surprised me with this plot; at least until the shocking ending.

Final Verdict: The best in the series, with a more coherent plot and less mopey teenagers. The trick is making it to this book.