We got up at stupid o’clock on the morning of the 07.07.11 and made the journey to London. We were very excited at the prospect of making it into the premiere of Harry Potter and the Deathly Hallows, Part 2. We arrived in London, glassy eyed and with huge grins on our faces. We hastily made our way to Trafalgar Square. We could see lots of posters for Harry Potter and the entrance to the event. What we didn’t notice straight away was how long the queue was already (or the people camped out in the square, where they had been for a week)! It was barely 8am, probably earlier. We followed the line down the street (it was a pretty long street) and around the corner, and up that street. By this point we were a little wary about getting into the event, but ever optimistic.

We stood in line and chatted to the people around us. The homemade t-shirts that Lynne had made caught people’s attention and soon someone was taking our picture for a blog. We particularly liked to fans that had travelled from Germany; Clara and Hannah. Hannah didn’t speak a lot of English, but the Clara translated. We shuffled, painfully slowly, down the queue.

After a few hours, a man in a yellow jacket (I guess he was security) shouted up the queue that no more people would be getting into the event, and to head up to Leicester square, where there might be a chance to see the

actors there. We raced up to Leicester Square, which at the time was undergoing major reconstruction; so pointing the whole queue in that direction was DEFINITELY a bad idea. Once at Leicester Square we looped around and headed back towards Trafalgar Square. It seemed highly unlikely that the actors were going to push their way through the crowds to get into the theatre.

We walked down a street that was decked out with all the houses’ coat of arms. We were told that this was where the actors would walk down to the theatre. Excited by this we stopped by the barriers to wait. We camped out here for a long, long time. It poured with rain, and I really mean poured. I’ve never been outside in rain like that. It was relentless. And to make matters a little more desperate, we had 1 umbrella and there were now 4 of us! Lots of people started queuing there with us, and we were interviewed by a reporter (we didn’t catch who he was reporting for, mind you). Using the power of a smartphone, Lynne had access to her facebook. This was great because she had asked people to tell her what Harry Potter had meant to them, and their memories of the series. So in the pouring rain, with just our heads under an umbrella, she read aloud how much people’s lives had been touched and improved through Harry Potter. It was pretty magical and made what could have been a miserable time into a great memory.

Sadly, due to the rain, the route to the theatre was cancelled in favor of cars so the actors wouldn’t get soaked. Frustratingly, the security staff didn’t seem to know anything, and we waited several more hours on the hope they gave us, that the rain would stop

and the plans would change.

After getting horrendously soaked and freezing, we decided to find somewhere to eat something and get a hot drink. We shuffled over to a cafe near Trafalgar square. Afterwards, we headed inside the National Portrait Museum, and sat down to wait for the premier to start. It was still hours and hours away. We did, however, dry off, which was nice.

Once we had recuperated, we headed back outside and went to stand across the road. We walked up the steps of a
building and could just see over the fences by angling the camera high (see picture of the red carpet right, below). Unfortunately, we didn’t see any of the actors and it started raining again! Plus, the crowds were growing, which made it ever more difficult to see anything.

In the end, we made the difficult decision to leave. But we left to get books signed by Robin McKinley at an event she was having in another part of London (see Meeting Robin McKinley).

So, we didn’t see a whole lot of the actual premiere! But, we did have a LOT of fun, despite the rain. The atmosphere was electric, and we all feed of that excitement and anticipation.

Final Verdict: I wouldn’t plan on attending a premiere unless you have tickets, or it is a small premiere where fewer fans will attend. You might well be disappointed. 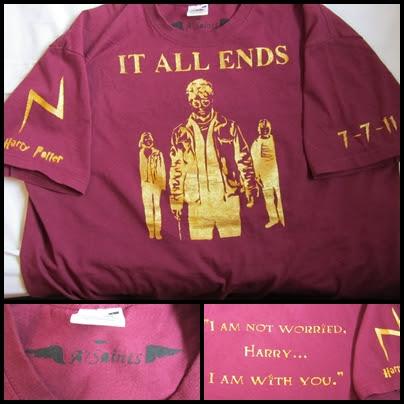 One thought on “London Premiere of Harry Potter and the Deathly Hallows, Part 2”