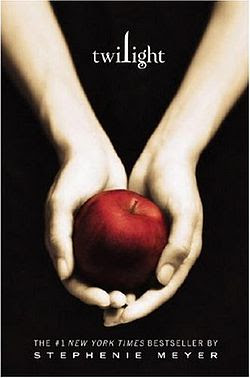 “Harry Potter is about confronting fears, finding inner strength, and doing what is right in the face of adversity. Twilight is about how important it is to have a boyfriend.”
Stephen King

Twilight, by Stephanie Meyer, tells the story of Isabella (Bella) Swan. Bella moves to Forks to live with her dad at the start of the book. She starts a new school and is all the town is talking about. One person at the school stands out; Edward Cullen. Edward is handsome, but aloof, and seems pretty disgusted by Bella at first. They are both drawn to each other though, and Bella begins to notice odd things about Edward. Finally, she figures out his secret; he’s a vampire. That’s not the biggest problem. You see Bella’s blood is extra special to Edward. It’s his crack cocaine. Will Edward resist eating Bella? Will their relationship survive the odds stacked against them?

I actually cringed writing that summary. Sigh. Let me start at the beginning. I first read Twilight in the summer of 2010. I’d been given the book to read by my boyfriend (he’d read them after watching the movie). I really enjoyed the book and lost a whole day as I raced through the pages, eager to find out what happened at the end.

A few months later, I decided to re-read the book. It was like reading a completely different story; one that lacked plot, and one that was badly written. I quickly became irritated by a number of things. First, the plot was severely lacking. Three quarters of the book literally go like this: Bella watches Edward, Edward watches Bella, Edward tells Bella to stay away from him, Bella ignores Edward, Bella does incredibly stupid things and Edward saves Bella. That’s it! Finally, Bella learns what the reader already knows; Edward is a vampire. Shock horror! When the pace picks up a little, as James (a hunter vampire) sets his sight on Bella, Bella blacks out when the action starts and the reader misses it. What was Meyer thinking? Honestly!

Second, the relationship between Edward and Bella is creepy and young adults should not use this as a reference in their own relationships. For example, Edward sneaks into Bella’s room to watch her sleep at night. What the hell? If someone did this to me, I would call the cops and report a stalker. What does Bella do? She likes him more for it.

Third, although Edward is supposedly a Vampire, he is pretty lame. He lacks all of the characteristics that make a Vampire. While Meyer says that Edward has a lust for blood, if she didn’t tell the reader, you wouldn’t know. He’s too in control. I get that some vampires might drink animal blood, but they should still be dangerous. Jasper was a better take on a Vampire who drinks animal blood, but still feels the blood lust. Edward is just too good. Plus, Edward doesn’t have fangs, which is weird. Instead, he just has sharp normal teeth. He isn’t affected by crosses or stakes, and he can go out in the sunlight (i.e., he doesn’t burn). Instead, he sparkles. What is that?! Why would an author do that?!

Fourth, Bella actually offends me as a woman. She is a terrible role model for young, impressionable adults. Bella is so weak. She’s entirely dependent on Edward. When he goes away to hunt, she has no life. She does nothing. Oh wait, she obsesses about Edward. She’s also so consumed by Edward that she passes out when he kisses her. When he says it would be best if he left, she almost dies! It is disgusting to read about a female character who is that dependant on a man. It frustrates me to no end.

Fifth, why would any writer talk about how god-like Edward is repeatedly? Meyer talks about Edward’s chiselled marble skin, and his amber eyes, and his Adonis looks WAY TO MUCH. Seriously! I got it after the tenth time! Jeez!

Sixth, what is Edward’s obsession with making Bella eat food? There are too many times in the book where Bella describes the food she is cooking to eat because Edward told her to.

My theory is that Twilight is a good read if you’re not really thinking. If you just race through, without paying much attention and without using your brain, it’s enjoyable. Once you engage in the story, it falls flat, really flat. There just isn’t enough of a plot to make it interesting. It’s literally about two teenagers falling in love. Okay, so one of those is a vampire, (laughs) although he’s not really.

Don’t even get me started on the movie. I didn’t think it could possibly be worse, but oh how wrong I was. If you take a crappy book and take actors that can’t act, well, that’s Twilight for you.

I admit I feel a bit awkward even typing about this book, mostly because I have been such a massive advocate against it and everything it stands for. Let’s get one thing out of the way, I love vampire fiction. It is one of the areas of YA that I have read a ton of books, and my entire earlier adolescent years were spent on finding as many books that fit this genre.

Since many of my friends knew this about me, I was not surprised when one of my (not very close) friends said she had a book I would love, and handed me Twilight. This was in 2007 and was before the series was popular, so I had never heard of the series before. I thought it looked rather interesting, and it was impressively large.

Without knowing much more than that I opened it and started reading. Or I should say, attempted to start reading. In the two months that it lived next to my bed, I could not get more than 100 pages into the book. I tried, I really did, but it felt a bit like torture to make it even that far. I might have tried to push through (and given enough time, say 10 years, I could have finished it), but my friend needed the book back as her sister wanted to read it. Obviously, I could not get it out of my possession fast enough.

For me the reason it was unreadable was that the characters were completely unlikeable. Bella had no redeeming features; in fact her only feature seems to be that she hates everything about moving to Forks. I think it is a sad state if a town is so bored that one new girl, with no personality, is the most sought after date. I really did not get to find out much about Edward, except that he was already following Bella around very early on. Honestly, the writing is worse than most of the fanfiction I have read.

Obviously by not finishing I missed some of the crucial plot points. When one of my friends informed me the reason the Cullen vampires cannot go into the sunlight, the fact that they apparently sparkle, I honestly thought she was pulling a prank on me. I can handle vampires being a bit tame, or not burning completely in the sun, but this complexly removes any sense of threat or danger from them.

Now fret not dear readers, I have come to know the rest of the plot of Twilight, mostly by just being alive, but also I have watched some lovely satires of it. But my favorite would have to be “Alex Reads Twilight” on YouTube. Alex does nothing more than read the book and make comments about what he has read, and at times use Meyers’s own words to support his points. From watching the whole series, I feel like I saved precious hours of my life that I could have wasted reading this book. He highlighted again how poorly written the whole book is.

One of my biggest issues with this series, and its impact on young girls, is that Bella is an extremely weak girl. The book is all about the importance of having a boyfriend, and that you can get one without being the least bit likeable or more interesting than a wall (my wall takes offense at this, as it is actually rather interesting). She only ever thinks about Edward, and in fact seems to not go to a real school, or have real interactions with anyone. She also seems to have no common sense. I work in Forensics, and I can tell you that Edward’s actions are not romantic. In fact, if someone was doing what he did in the book, I would tell you to call the police, file a restraining order, and start taking some self-defense classes. Stalking is not romantic and can have very tragic results.

Now I can give anyone who is interested a whole list of similar books, that are better written, and have stronger leads. Hopefully, I will have reviews to these soon, but here are some of my suggestions: Companions of the Night by Vivian Vande Velde, In the Forest of the Night or Demon in My View by Amelia Atwater-Rhodes, The Silver Kiss by Annette Curtis Klause, Look for Me by Moonlight by Mary Downing Hahn, Sunshine by Robin McKinley, anything by Anne Rice, and so many more.

I am all for supporting reading and anything that gets people reading. But I have a lot of problems with people thinking Twilight is literature. I am fine with people reading it because it is an easy read, and there is no thought involved. Or the people who treat it like a train wreck that you just have to know how it ends. But for those that think it is a work of art, novel, or a good role model of perfect love, you are wrong and need to go live a little, and try to expand your mind in whatever way you want. And for those of you who have friends who have fallen to this evil, please try suggesting any of the books I have listed above, and try to slowly prove your case (as I have helped Frances and countless others realize, usually by handing them a stack of books and telling them to read those!).

Final Verdict: Run the other way! Hide them from other unsuspecting buyers and stop all association with people who champion this book!