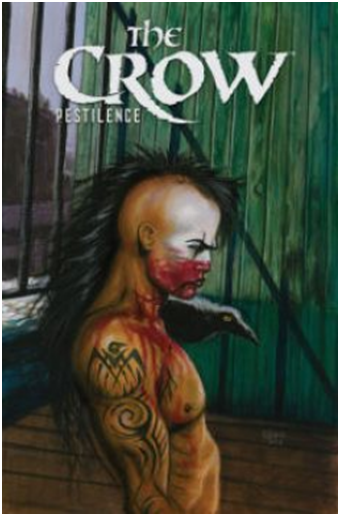 “Let my words be carried with you until my return. ‘Cause I will return, to right the wrongs you’ve forced upon on this day, a hundred times worse.”
The Crow: Pestilence by Frank Bill and Drew Moss

As I mentioned when I reviewed The Crow: Curare, I am a huge fan of The Crow franchise. Therefore, no one should be surprised that when I saw The Crow: Pestilence on Net Galley, I immediately requested it. In contrast to The Crow: Curare, The Crow: Presilence doesn’t seem to have had any input from James O’Barr, the creator of The Crow.

The Crow: Pestilence follows the death and revival of Salvador, a boxer from Juarez, Mexico. He refused to take a fall after he took money from a gang of drug and human traffickers. The gang was not happy, and exacted their revenge on Salvador and his family. He returns as the Crow several years later to exact his vengeance, and maybe something more. 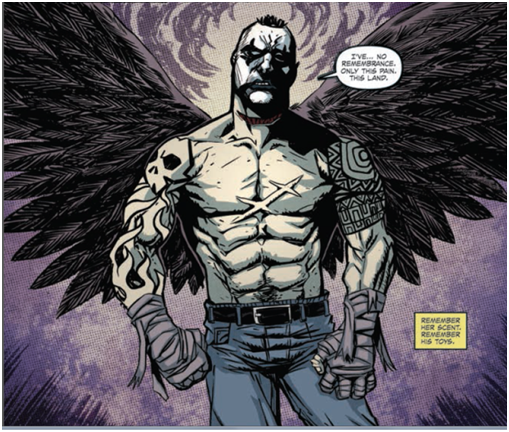 I have to say of the many Crow stories that I have read, this is the darkest and bloodiest that I have read. While all Crow stories are dark, this one actually shows a lot more of the violence and blood, rather than alluding to what happens without showing us. Also, it seems to use the most curse words. While the darker and gorier tone with the plot, it was just a bit surprising and something that potential readers should be aware of.

Overall, I enjoyed the story, and I felt that the story fits in well within the established Crow mythos. However, there was something about this story that just didn’t grab me like some of the other stories. I think that the reason that the story lacked impact was that for over half the story I had trouble telling many of the characters apart. This was partly due to the art and partly due to the story telling. This meant that I found the plot a little harder to follow than usual, and I didn’t really enjoy the comic. Also, most of the main characters were clearly meant to be Hispanic, and as such it was implied that English was their second language. The use of very bad English so frequently in this story really rubbed me the wrong way, and at times made it hard for me to follow what was being said. I like that there were characters that weren’t White, but I felt like there was a lot of reliance on stereotypes to convey this. 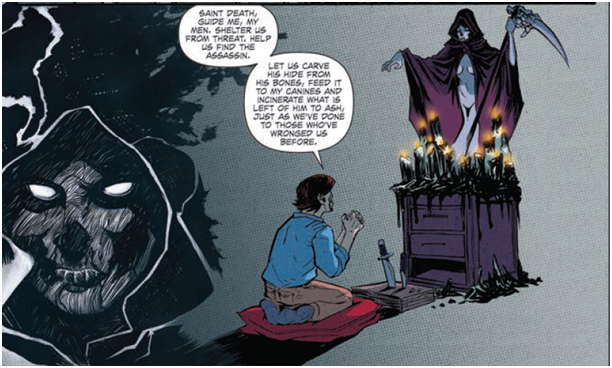 The bad guys in this story reminded me of the group that attacked Eric Draven in the original Crow comic. There was a group of four of bad guys with pretty funny names: Raw Dog, Flesh Dog, Mange Hound, and War Hound Lou. However, I can’t really tell you any defining characteristics of any of those characters, or what order they died in!

Unlike in previous stories, it seems that Salvador has been dead a long time in this story. Usually the main character is dead between one day and one year. However, it seems that at least 6 years have passed since Salvador’s death, but there is no real clue as to why there was such a delay in the vengeance in this particular story. It made it more believable that the bad guys didn’t immediately recognize him, but it was weird timing. There is also some really weird magic/spiritual stuff with Santa Muerta that I didn’t really follow, so I am still not completely sure what happened at the end. 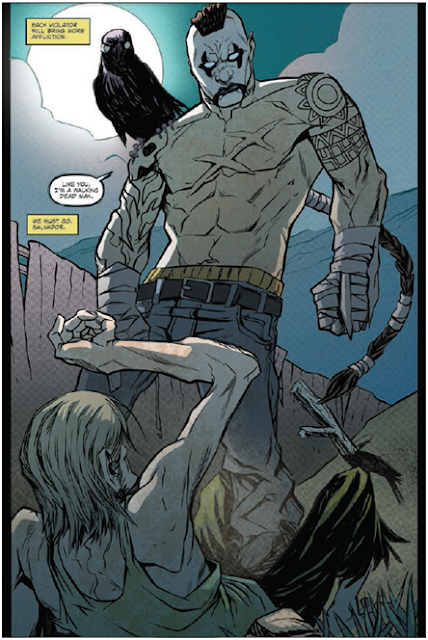 The things that really saved this story were the twists towards the end. There were two twists that were really unexpected to me, and I loved them. They really worked well, and without them, I don’t know that I would have recommended this story due to the other issues I had.

Final Verdict: A new Crow story for old fans that can handle lots of violence and blood, but not for first time Crow readers. Plus, an ending that saves the mess of the first 60 pages.