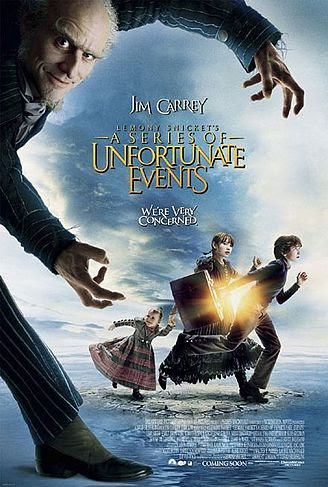 “All that I ask is that you do each and every little thing that pops into my head, while I enjoy the enormous fortune your parents left behind.”
Count Olaf in Lemny Snicket’s A Series of Unfortunate Events

Lemony Snicket’s A series of Unfortunate Events is based on the first three books (The Bad Beginning, The Reptile Room, and The Wide Window) in the A Series of Unfortunate Events series written by Lemony Snicket. In the movie, Lemony Snicket (played by Jude Law) is narrating a story about the three Baudelaire children; Violet who is often seen tying her hair up as she is about to invent something; Klaus who has an eidetic memory and is very intelligent; and Sunny who is still a baby, but a baby with a penchant for biting things. When their parents mysteriously die in a fire, the Baudelaire children are orphaned. Luckily, or rather unluckily, the children are taken in by Count Olaf (played by Jim Carrey) their closest relative (geographically rather than biologically, it would seem). Count Olaf only cares about the Baudelaire money and purposefully locks them in the car on a railway line. The children put their talents to use and manage to escape the car.

I really like the tone of this movie. It is unusually dark in comparison to other children’s movies. The children really do suffer a series of unfortunate events. The first unfortunate event is the death of the three children’s parents in a mysterious house fire. Then they are adopted by Count Olaf who neglects and abuses them because he wants the Baudelaire fortune. This makes the quieter moments, where the children make the best of a bad situation, so much more bittersweet. For example, after Count Olaf mistreats the children and locks them in the attic, the children pull together and make a tent. They shine a light on a picture of their parents and play together. This scene is quite heart-warming.

I think the start of the movie helps set the tone. The opening sequence is about an elf. The animation is very colourful and there is singing. Jude Law, as Lemony Snicket, starts narrating as the colour seeps out of the picture and everything comes to a stop. He explains that if you’ve come to see a movie that’s about a happy little elf, you should leave now, because what happens to the Baudelaire children is terrible. Usually, being told about how awful the life of the three children is going to be, prior to watching the movie, would have made me sceptical. Whenever someone has to reassure me how scary a movie is, I become sceptical. That being said, Jude Law acts very well and comes across sincere. The rest of the movie has very muted colours, including greys, blacks, and dusty blues and purples. 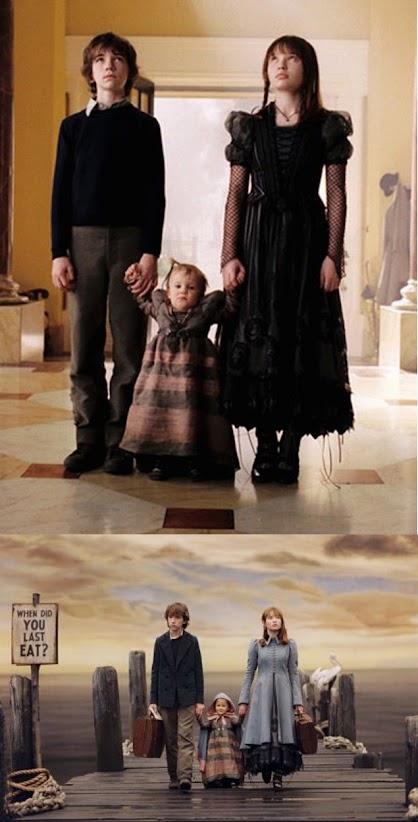 I love the clothing that the children wear (see right). Violet wears black lacy dresses throughout and she wears her hair braided, tying her hair up with a black ribbon at times. Sunny wears what can only be described as gowns. One dress was particularly pretty with mauve and pink stripes. She also wears a cape instead of a coat. Sunny has always puzzled me as a character. I know that she’s not old enough to speak yet, which is why she still talks nonsense, and this would be fine if what she says wasn’t subtitled in such detail. I just find it a little strange.

The children acted really well throughout the movie. Usually, when there are children in a movie, they overact. I thought the children did a really good job conveying their characters. Liam Aiken, who played Klaus, did a really good job of subtly showing how bright he was. He would think through a problem and come up with a solution. Emily Browning who played Violet did a good job showing emotion when necessary. Although, she did tend to purse her lips a little too much in the movie, which after a while, bothered me.

Count Olaf, played by Jim Carrey, was a brilliant villain. His natural acting style is flamboyant and I think that worked well in the movie. The first few scenes with Count Olaf are hilarious. He demonstrates how little he cares about the children through his slip-ups in speech. For example, he accidentally talks about wanting the Baudelaire fortune at times rather than the children. These could have been slightly more natural, however. It did come across as acting at times. I do think Jim Carrey did a good job when in the disguises (see below). He changed enough between the characters to keep the movie interesting. It was obvious that it was Count Olaf though and it is a little frustrating to see the adults repeatedly ignore the children when they try to tell them. The most frustrating is the banker. The banker should be smart considering his position but he is incredibly oblivious to Count Olaf’s intentions. As a result, parents get a rather bad reputation.

The calibre of the actors in the movie is clear. There’s Billy Connelly who plays Uncle Monty. He’s a delight to watch act. Then, there’s Meryl Streep who plays Aunt Josephine. I love Aunt Josephine the most because she is so terrified of being killed in her own home. She warns the children repeatedly about things that could kill them. For example, the fridge could fall and crush them or the doorknobs could shatter and take out an eye. It is ironic that she lives in a house built on stilts hanging precariously over the edge of a high cliff with the sea below.

I have to admit that the story loses its punch as it progresses. I love right up until they get to Josephine’s house, but from there on, I do lose interest. As a result, I’m not as familiar with the end of the story because I pay less attention. I wish that the movie had gotten better as it progressed, not worse.

Finally, I love the number of eyes that appear in the movie. I didn’t notice this myself, but, once it was pointed out, I see eyes in new places every time I watched the movie. The eye is important, which you’ll see by the end of the movie, so it’s included everywhere in Count Olaf’s house. There are eyes on all the windows, on the stairs, on the plaster work on walls and there are even peacock eyes on the wallpaper. I’m sure there are lots more that I haven’t spotted. Have you seen any others?

It’s the same with the Elf who crops up in numerous places. Count Olaf has a nodding elf in his car, the song plays in some of the car journeys and some of characters talk about the elf at times. Again, I guess there are more than just these few examples. Have you seen more?

Final Verdict: If you like dark children’s stories, you’ll enjoy this movie.