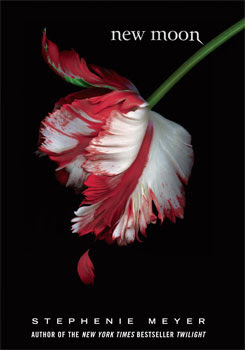 “Time passes. Even when it seems impossible. Even when each tick of the second hand aches like the pulse of blood behind a bruise. It passes unevenly, in strange lurches and dragging lulls, but pass it does. Even for me.”
Bella, New Moon, Stephanie Meyer

New Moon by Stephanie Meyer continues the story of Bella Swan and Edward Cullen from Twilight. The story opens with Bella’s birthday. She is not a fan of birthdays because of the attention and she doesn’t like to receive presents, but Alice Cullen has organized a birthday party for her at the Cullen residence. While there Bella gets a paper cut and in a house full of Vampires that’s the worst possible outcome. Edward manages to get Bella out of Jasper’s way, but she ends up with more cuts along her arm. Once Carlisle has bandaged her arm, Edward takes her home. He is cold, aloof, and leaves immediately. This continues the following day until Edward tells Bella he is leaving Forks and he does not want her to go with him. The rest of the book deals with the following questions: How will Bella cope without Edward? Will Edward ever return? Who is the new threat to Bella’s life?

On the whole, New Moon is marginally better than Twilight, and I mean marginally. The same problems in Twilight still exist, but two in particular are amplified: Edward and Bella’s relationship becomes more unhealthy (I didn’t think that was possible), and Bella becomes more of an insult to women everywhere. Bella basically stops living once Edward leaves her in Forks. There are several blank pages in the book which only have a month written in the middle. This represents the time that has passed since Edward left, and Bella essentially stopped living. The fact that she can’t live without Edward, and so just sits around doing nothing, seeing no one and clutching her sides trying to keep herself together, isn’t realistic. It would be more realistic if Bella were at least mad at Edward for leaving her because of an accident. To make things worse, when Bella’s dad forces her to go out with a friend and gets into a precarious situation, rather than getting to safety, she approaches the men because she hallucinates Edward’s face. Throughout the rest of the book Bella puts herself in increasingly dangerous situations just to see Edward’s face. In terms of being a relationship template for young adults, this essentially tells people to be obsessive, and that really unhealthy relationships are normal. It tells young adults not to move on when a relationship ends. In terms of Bella being a role model for young women, she’s very, very bad. She gives up on her life and is unable to go on without Edward. This doesn’t teach women to be strong and to push through hard times. I would have more respect for Bella if she had at least made an effort to move forward, even if she couldn’t let go on the inside. Plus, the fact Bella forgives Edward the minute he’s back, without so much as one angry retort, is frustrating. He left her and pretended he didn’t love her, and the fact she doesn’t give him a hard time reeks of desperation. I think Edward could actually drink her blood to within an inch of her life and she wouldn’t even scold him for it!

Earlier I did say that this book was better than Twilight, book one. There are two reasons for this: Jacob and the Volturi. Jacob becomes Bella’s best friend and he is a werewolf. He is kind to Bella and treats her with respect (unlike Edward). He made the story a little more interesting, although I think adding a love triangle between a human, a Vampire and a Werewolf is a bit predictable. I saw it coming as soon as Bella started hanging out with Jacob. The Volturi are kind of the head Vampires, who live in Italy. They are more traditional Vampires who drink human blood. I’m not sure why their eyes are red though, but oh well. I actually mildly enjoyed reading about Edward trying to commit suicide by sparkling in front of hundreds of humans (groans). Plus, the Volutri then demanded to see him and I enjoyed the powers that they possess. They also tell Edward that he must turn Bella into a Vampire or else they will kill her because she knows too much. I have to say that how Edward and Bella beg the Volturi for each other’s lives is sickly sweet. It’s not that I think they shouldn’t do this. It’s very cringe-worthy.

Final Verdict: If you have to read this book just try to detach yourself and don’t use Bella as a role model.

For other books in the series see Twilight (book one), Eclipse  (book three) and Breaking Dawn (book four).