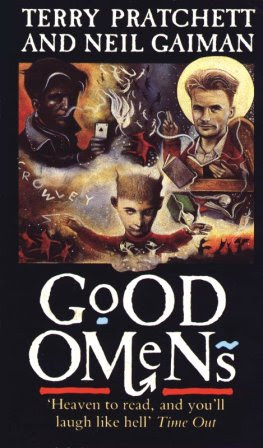 “‘A demon can get into real trouble, doing the right thing.’ He nudged the angel. ‘Funny if we both got it wrong, eh? Funny if I did the good thing and you did the bad one, eh?”’
‘Not really,’ said Aziraphale.”
Good Omens by Terry Pratchett and Neil Gaiman

This was a book that I had heard about for a long time, and many of my friends had recommended it to me. Then one of my housemates got fed up with me always saying I would read it and handed me their copy of the book. Unfortunately, I only made it about halfway through before we moved into new places. By then, I knew I had to finish, so I borrowed an e-book from the library.

This is a very strange book, and as such I can’t really decide how I feel about it. I liked it, but I also think it is a book that needs to be read multiple times to truly love. It is a study in absurdity, and cannot be read on just a surface level, as there are so many crazy things happening with no character reacting to the craziness.

The story mostly focuses on the last week of life before the apocalypse happens. You might say it is a bit like The Omen if the evil forces that had placed the antichrist with its new family had been more incompetent and less evil. There is a vast spread of characters, with a handful being followed throughout the story. Other characters are introduced for only one scene and then fade away, never to reappear. The story flips at a fast pace between all these characters, slowly revealing to the reader the big picture of what is happening. It is set in an alternate contemporary world, mostly in England. There is a touch of strangeness to everything, such as the “members of the convent were old-fashioned Satanists, like their parents and grandparents before them. They’d been brought up to it and weren’t, when you got right down to it, particularly evil.” There are these touches everywhere in the story and when you just accept them it makes the reading easier.

Some of the characters that are followed throughout the story include the possible antichrist, a young boy named Adam Young and his group of friends. There is Anathema, the descendent of Agnes Nutter who predicted accurately the end of the world, and Newt the new witch hunter who doesn’t really believe in anything. The four Harbingers of the Apocalypse, with War being a sexy lady always in red. But there are also my favorites, Crawley, a demon (actually “An Angel who did not so much Fall as Saunter Vaguely Downwards”), and Aziraphale an angel. These two have an amazing dynamic, instead of being bitter enemies they have become friends over their long tenure living on Earth. In fact, they both begin to understand that they have more in common with each other than with their respective sides.

As you can probably see from my statements, the list of characters, and the quotes, it is a strange book. I have not even begun to mention all the strange actions. But for all of this, I enjoyed it; however I found the pacing a bit slow. I think for me, the scenes with Adam and his friends (the Them) seemed to drag and I really had to push to get through them. But then there were other sections that I just couldn’t put down. Mostly the scenes with Crawly and Aziraphale, which I think there could have been more of.

But I have to say having read quite a bit of Gaiman’s works before; I can see his influence in the story. It also helped me decide that I want to read some of Prachett’s individual works soon.

Final Verdict: Smooth sailing ahead. Read if you like either author or really absurd stories. But it will not be everyone’s cup of tea.