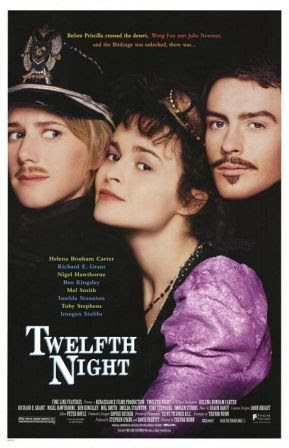 “She never told her love, but let concealment, like a worm ‘i th’ bud, feed on her damask cheek. She pinned in thought; and, with a green and yellow melancholy, she sat like Patience on a monument, smiling at grief. Was not this love indeed? We men may say more, swear more; but indeed our shows are more than will; for we still prove much in our vows but little in our love.”
Viola in Twelfth Night by William Shakespeare

Although, the first Shakespeare I read was The Tempest when I was 11, it was just one year later I was introduced to the first Shakespeare play that I loved. In my advanced reading class we were reading through some of the older classics, and had been making our way through the Canterbury Tales, when our teacher was ill and a substitute was in charge. Instead of making the substitute read and attempt to understand the Canterbury Tales, our teacher left a movie. I have no memory of how anyone else reacted to the movie, but I was entranced, and could not believe how funny the old play was. When I returned home that day, I went to my parents’ library, which mostly consisted of their old books from university, and I was pleased to find a copy of Twelfth Night buried on a dusty shelf. This book has not left my bookshelf since then. I cannot remember how many times I have read it, and I have seen it performed live at least 4 times, and watched at least 3 different filmed performances. However, this is the movie that I always return to!

Twelfth Night is one of Shakespeare’s comedies, which means there are several plots happening at the same time, all to be resolved in the finale. The main story revolves around Viola, a young girl who has been shipwrecked, and believes her twin brother, Sebastian, died in the shipwreck. To survive she dresses as a man and takes the name Cesario. She finds work for the Duke Orsino, and quickly gains his favor, and is entrusted with the job of trying to woo the Lady Olivia for the Duke. Olivia has also recently lost a brother, and says she will not court for at least 7 years. But Cesario is young, brash, and has a quick wit, all of which helps Cesario gain an audience with Olivia. Olivia starts to fall for the young Cesario, but stays resolute that she is not interested in the Duke. While carrying the messages of love to Olivia, Viola finds herself falling for the Duke, thus creating a love triangle. While all of this is happening, Viola’s brother is actually alive and ends up traveling to the town Viola is living in. Neither is aware of the other, and people begin to mistake them for each other. Eventually, Sebastian marries Olivia, beats her kinsman, and loses track of his only friend. Viola, meanwhile, is saved by Sebastian’s friend in a sword fight, is accused of marrying a woman and betraying the Duke. Then the twins finally show up at the same time, and everyone realizes what has happened. Olivia realizes she has married Sebastian, and the Duke realizes that all the times Cesario said he liked someone like the Duke, it was really Viola saying she liked the Duke. So a double wedding is planned and a celebration.

There is a secondary plot running throughout the play as well. It focuses on Olivia’s kinsman, Sir Toby Belch, and his companions enacting revenge upon the stuffy, pompous, and egotistical butler, Malvolio. The main players in this part are Toby, Sir Andrew Aguecheek (a potential suitor of Olivia’s), Maria (the lady in waiting who is in love with Toby), and Feste (the jester that Olivia enjoys). They write a fake love letter to Malvolio in what appears to be Olivia’s handwriting. Malvolio dreams of marrying her and becoming higher than his status, and falls for it. In the letter is advice on what would please Olivia, but really it is just things that will make him look foolish. Then with careful manipulating they get Malvolio locked up as a lunatic. It is not until the celebration that Malvolio is freed, and he accuses Olivia, but she figures out it was Maria’s handwriting. Feste and another servant are the ones who confess their part, and use Malvolio’s own words to justify it. In the end, the Orsino attempts to placate Malvolio, but Malvolio swears revenge on everyone and leaves.

I think the one aspect that entranced me when I was younger is how effectively Imogene Stubbs portrays a man. This is still one of the best examples I have seen in any performance of the play. It is still clear that she is a woman, but it does not take as much suspended belief to accept that she and Sebastian are being mistaken for each other. I also loved that her voice was a bit androgynous as well.

I think that one of the most impressive things about this movie, is the strength of the cast. Besides Stubbs as Viola, you have Helena Bonham Carter as Olivia, Toby Stephens as Orsino, Mel Smith as Sir Toby, Nigel Hawthorne as Malvolio, and the best by far is Sir Ben Kingsley as Feste. The actors all seem to have really understood their characters, and really brought them to life. The interactions between the characters really brought the play to life.

The physical humor of the movie was something I had been completely unfamiliar with in theatre until this point. When people accidentally touch Cesario in a way that they would not to a woman it was funny to watch her squirm. Watching Cesario and Sir Andrew attempt not to fight one another was easily understandable even when the phrases were just beyond a 12 year old’s understanding.

I think the one character that really made me fall in love with the story was Kingsley’s portrayal of Feste. There is so much ambiguity in the actual play that there are many different ways Feste can be played, but there is something about Kingsley’s somber fool that appealed to me. There is an almost haunted depth to his character, and yet he will put on a smile and act crazy if he is getting paid to. He really shines when he is using his wit, or singing a melancholy song. There is the added depth that he is shown watching Viola and the other shipwreck survivors wash ashore, so you spend the whole time wondering how much he knows, and if he is orchestrating things behind the scenes. While it is never really explained, I like to believe that he knew theere were twins the whole time. This is still my favorite portrayal of Feste and the standard to which I compare all other versions to.

To make Feste even better for me, the songs in this version are very well done. They capture the mood of the play at that moment, and often reveal more about what is happening than words could. I find that even outside of the play they are enjoyable to listen to. I have linked a couple here for those that are curious. The Wind and the Rain is sung at the very end of the play, O Mistress Mine is sung for Toby, Maria, and Andrew right before the plot to get revenge against Malvolio is hatched.

Overall, I find this a good movie, and a great introduction to Shakespeare. It has been slightly modified from the original play to flow better, and some dialogue at the beginning is added to make the story make a little more sense. Even my mother, who does not usually watch any Shakespeare, nor has any desire to, enjoyed the movie.

Final Verdict: A great movie, and one that is nice for a quiet night in with a few laughs and some romance!