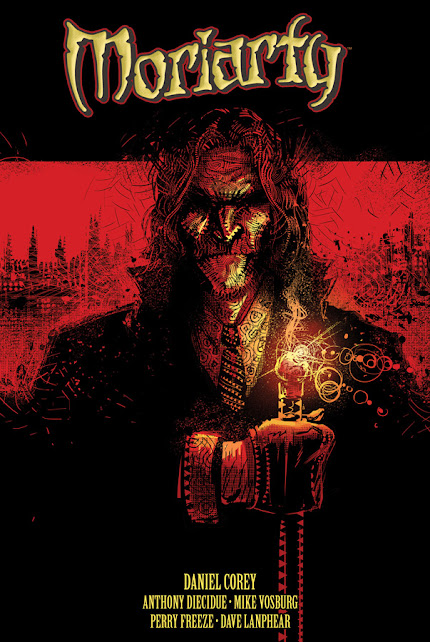 “Then one day the dragon had a face. I looked deeply into that face…and I killed it. For a moment, it seemed I had escaped death, and was born again. But then I realized…it is the fear of death that really makes you alive…”
Moriarty in Moriarty written by Daniel Corey

Besides my subscription to the Batwoman comics, I am not usually one for American styled comic books; instead, I tend to prefer the Japanese (manga) comics. However, when I saw that there was a comic called Moriarty on Netgalley, I downloaded it immediately. Sherlock Holmes is one of my favorite characters, and his nemesis Professor Moriarty is one that has intrigued me in so many versions. I was able to read through the two-story arc comic in one day, and honestly, I could not put it down once I had started reading.

The first story arc, The Dark Chamber, starts right after the murder of the Archduke Franz Ferdinand, on the precipice before World War I. It has been 20 years since Sherlock Holmes died at Reichenbach Falls (and he hasn’t been resurrected 3 years later in this version), and Professor James Moriarty hasn’t been the same since. Now going by a number of aliases, Moriarty has given up his criminal empire and operates a much smaller dock-side operation that functions more like a private investigator. Just as Moriarty starts to poke into the cause of the Archduke’s assassination, MI5 (a secretive spy network run by the government) blackmails Moriarty into looking for Mycroft Holmes, Sherlock’s brother, who has disappeared. Moriarty must call upon people from his old life, and reawaken his old skills as he falls down into a strange world where science is mixed with Greek mythological code names. Can he stop the mysterious man behind it all, and can he find a way to truly live again?

I will be the first to admit that I love an anti-hero or a more neutral villain (sometimes even a real villain), so this book was perfect for me. I loved the character of Moriarty, mostly for all the same reasons I have always loved Sherlock Holmes. We are able to see how brilliant Moriarty is, and in The Lazarus Tree, we can see just how vast his network had been before the Reichenbach Falls. Around Moriarty, Holmes’s ghost is palpable. Without the consulting detective around there is no one that can challenge Moriarty, and he cannot function without that perfect nemesis. It was strange to see the story from the other side, since there are so many versions from Holmes’ point of view. In a way, Moriarty appears broken, and a man looking for some sort of redemption. It would be a mistake to think that Moriarty is a hero, but he will save some people, and he will stop plots to destroy the world. There is a moral ambiguity to him that is interesting, as you are never sure that he won’t just kill someone nor do the ‘evil’ thing. This is a wonderful freedom that you get when a character is not actually a hero!

As far as the mystery goes, I will admit, I am still not sure I followed everything. Usually this would bother me, I usually like to be able to figure everything out at the end, but with this story, I was okay with it. Most of this is because the author and artists blended Arthur Conan Doyle’s world with science and Greek mythology. There are supernatural elements, and these leave you wondering what really happened, and if the magic is really there or not.

I found the first story arc easier to follow. However, I think I liked some of the revelations from the second story arc better. The trouble with the second arc was that at times it was hard to tell what was a dream and what was reality. While I think this is purposefully done to reflect what is happening to Moriarty, it still is a bit jarring. There are also times when it is hard to tell whether Moriarty is talking or someone else. I am still not sure, looking back, what the actual reality is, but I think if the series continues it will become clear.

The artwork is very different from the Japanese styles that I tend to prefer, but the grittier artwork was perfect for the story. Moriarty is a hardened man, and there is a roughness about his face, yet he can still walk in the refined society. His appearance reminds me a bit of Wolverine from the X-Men, with his hair and stubble. For the most part, Moriarty is in a three piece suit, but in fights, he will take off the jacket and sometimes the waistcoat. His weapon of choice is a sword, not a rapier but more of a Japanese katana (a samurai sword), which is unusual but a perfect fit for his character.

There were parts that I wasn’t as fond of in the story. The first is that the timing seemed a bit off. I know that for it to be set on the eve of World War I, twenty years need to have passed, however things don’t feel like that. Instead, Moriarty still seems at the top of his game. Even if he was in his 20s when he fought Sherlock, this would make him at least 40, and realistically he is probably closer to 60 at this point. So to see him racing around, fighting, and surviving explosions was a bit unrealistic to me. There is also a lady that he supposedly knew in his former life, and she did not look even close to 40, yet should have been. However, none of this ever really detracted from the story.

I did love the emergence of characters and plot pieces that I recognized from the original Sherlock Holmes stories. There are at least 4 characters that I recognized from the cannon stories, and at least one great mention of starting a Red-Headed League! Overall, I want to buy this book, and re-read it many times! I will be on the lookout for the continuation of this series, as I think there is so much potential still.

Final Verdict: A great reimagining of a classic character with a complicated plot and intriguing art. Not for everyone, but a delight for those who love anti-heroes.