As seen in Stratford-Upon-Avon, England
Written by William Shakespeare
Summer 2012 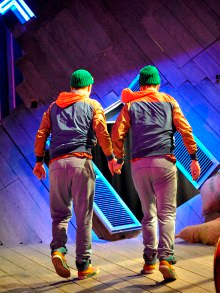 “We came into the world like brother and brother,
And now let’s go hand in hand, not one before another.”
The Comedy of Errors by William Shakespeare

This was the third of the three shipwreck plays written by Shakespeare that I saw performed (the other two being Twelfth Night and The Tempest), with the same basic set, and characters. I made sure I read the play before seeing it performed, and I have to say without seeing the actors while reading it is hard to keep straight which character is which. I was glad to have read it ahead of time asI was familiar enough with all the actors to guess 3 of the 4 twins, so I was rather proud of that!

The play is a little confusing because it revolves around two sets of twins, and each set of twins has the same name with only their city name being added to the end to differentiate them. The backdrop to the story is that the two cities Syracuse and Ephesus hate each other, and a new law has been set in Ephesus stating that any Syracusian found in the city is to be put to death. This is unfortunate for an elderly Syracusian named Egeon, when he is found in the city. The Duke of the city then asks him why Egeon would come even though he knew the law. Egeon tells the Duke he is looking for his son, and there is more to his story. Egeon was once the father of twin sons, and within an hour of their birth a servant woman also had twin sons whom he adopted to serve his boys. When he was traveling with the boys and his wife a tempest arose. During the storm his wife, one son and one servant attached themselves to one part of the ship, he and the other son and servant to the other side. The ship split, and his wife and the two boys floated away and were picked up by a different ship. He never found her, and instead raised his son, Antipholus of Ephesu and his servant Dromio of Ephesus. His son decided to wander and try to find his brother, and shortly after Egeon too started to look for his son, and thus he ended up in Syracuse. The Duke says if Egeon can raise enough money they will spare him. In the meantime, Antipholus and Dromio of Ephesus arrive and start to wander the town. Unknown to them, Antipholus and Dromio of Syracuse are well known in the town. What follows are many hijinks as the twins are mistaken for each other and no one can figure out what is happening, and why Antipholus seems to have gone crazy. In the end, they find that Egeon’s wife is the abbess, and that there were two sets of twins. Egeon is pardoned and there is a big party, and the twins have to come to terms with having brothers.

I have a couple of issues with the plot of the play, but not enough to dislike the play. My main issue is the fact that the servants are constantly being hit and reprimanded. While it might have been more common in Shakespeare’s time, the modern dress of the play made it a bit awkward. It reminded me a little of old fashioned humor films like Naked Gun, but it did help build the humor.

The humor and the mistakes were very amusing. It was easy to tell the twins apart (even if I sometimes forgot the Syracuse and Ephesus bits of the names). The situations and confusion are parts that have aged well, and were easily understandable, even to the younger members of the audience. There was some more humor added by the very noticeable height difference between the two Antipholus. While there was nothing about this in the script, there was several times where the characters’ gestures showed their confusion at the height defenses.

The best and most humorous actors were the two Dromios. They had been some of my favorite actors in Tempest and Twelfth Night, and were the two I knew would be the twins. They both have great comedic timing, and the staging played up to it. My favorite scene was when one of them was complaining about everything he had been put through, and an audience member “Awww”ed at the speech, and the actor took it in stride and said, “Yeah” as if to emphasize his pain. That scene had the whole audience laughing, and it was just the actor reacting to the crowd. The final lines of the play, where the one says to the other, “We came into the world like brother and brother, and now let’s go hand in hand, not one before another.” It was really moving and a great ending.

My only problem with the acting was Antipholus of Syracuse’s sister-in-law (and love interest for Antipholus of Ephesus). She was supposed to be the good sister, but in order to show that the actor portrayed her as much younger. While this was only slightly grating when she talked with her sister, it became weird when she was being courted by Antipholus of Ephesus. It just felt like there was a much larger age gap, and it was really creepy to watch.

The stage was still the same as in the Tempest and Twelfth Night, but a few things had been changed. There was a neat track across the ceiling that allowed things to be lifted on or off the stage. The most impressive being a small platform with chair, a table, and 2 actors on it. This platform was used not only as a change in the scenery but was used for comedic effect when Dromio would run away from being beaten and hide up on top of it. It was really impressive to see it enter the stage.

Overall I found it a funny and enjoyable play. It also showed me that most of the actors I had not liked in earlier plays could act, and had just been miscast in the previous plays. While I do not think I will read the play again, I would see it again, as it is very funny.

Final Verdict: A good play for those new to Shakespeare or young theater goers. A nice day out, and you will leave with a smile on your face!