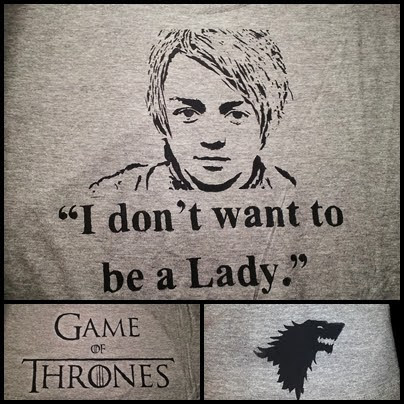 Text on Shirt:
Front: I don’t want to be a Lady (picture of Arya)
Sleeve: picture of Stark’s Direwolf sigil
Back: Game of Thrones

One of my strange addictions is watching videos of how to style long hair like people from movies and TV shows. When one of the vlogs (video blog) that I follow mentioned that she was having a contest that could be anything artistic as long as it had to do with The Game of Thrones, I knew I had to enter. I knew that I could do a stencil t-shirt, and I knew exactly who would be on it; Arya. As I was re-watching some of her clips from the show I heard the, “I don’t want to be a Lady,” quote and knew exactly what I wanted on the t-shirt (click here to watch the scene).

As part of the contest, I needed to submit a video for the contest. So I videoed myself making the t-shirt from start to finish, and then combined them into a video. You can view the video below. It was a very strange process, and it had a steep learning curve. In the end, I was rather pleased with how the shirt and the video turned out.

As for the t-shirt, I really enjoyed the end product. As far as pictures being turned into stencils, I think this is my best ones so far. While most of my previous ones were silhouettes, my only other actual picture (the It All Ends T-Shirt) did not turn out how I liked. I thought Arya’s face was easily recognizable. The rest of the text and Direwolf sigil had just a little seepage at the edges, and are better at a bit of a distance.

Overall I was happy with both t-shirt and video. I was very happy then to discover that I had won 3rd place in the contest. Even better, I won a prize pack, and the contest runner was good enough to ship it internationally to me. Below is a picture of my prize pack. I’ll also be adding reviews of the two Game of Thrones prizes to the Inspired By section soon. 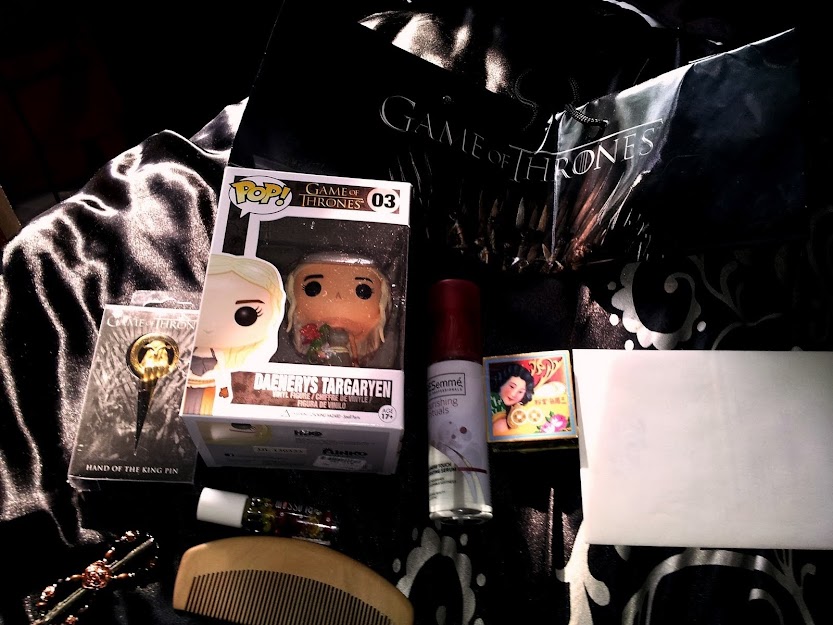 Final Verdict: Love how it turned out, and won a prize package with it!