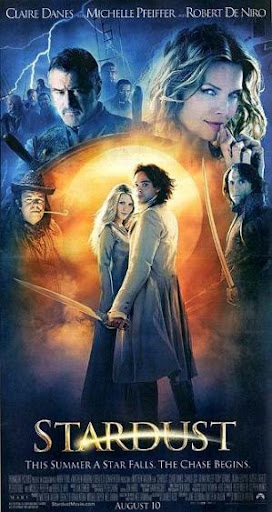 The first I heard of Stardust, the novel, by Neil Gaiman, was when the first trailers for Stardust the movie were released. I thought the movie looked interesting and wanted to see it. But several of my friends were super excited about the announcement of the movie because they had read the novel and loved it. Their glowing reviews and the look of the movie made me run out and pick up the book. I read the novel in two days and really liked it. I now joined my friends in eager anticipation of the movie. When it was finally released, I took a friend and we went to a late night showing. We were 2 of 6 people in the whole cinema. We had plenty of sugar and were a bit tired, and the movie was one of the funniest I had ever seen. But I had a feeling that it might have just been the slap-happy mood we had been in, but when I finally re-watched the movie, I found that it was enjoyable at any time. And the friends I have introduced to the movie have also enjoyed it.

The story starts in a small town called Wall, 150 years ago. A boy working in a shop, Tristan, is in love with the beautiful Victoria. She will not pay attention to him, and he ends up promising to bring her back a star that they see fall, if Victoria will promise to marry Tristan. Tristan attempts to cross The Wall, but is stopped (hilariously so) by the 97 year old guard. It is then that he learns his father also attempted to cross The Wall. When he asks his father about it, Tristan learns he was the offspring of an affair his father had when he crossed the wall. His mother left Tristan at The Wall in a basket with a note and a gift for Tristan; the gift is a Babylon Candle (a candle that can transport the holder with a thought when it is lit). Tristan ends up thinking of the star when it is lit and lands on a pale girl, and realizes that things on the other side of The Wall are more different than he thought (in fact it is a whole other world). He and the grouchy star, Yvaine, start to make their way back to The Wall and meeting Victoria, but on the way they run into a lot of interesting people and some danger. There are witches after Yvaine as well, and some princes who are trying to kill each other while they track a ruby that can make them the next King of the land across The Wall.

The cast for this movie is an impressive mix of well known actors, and relatively new actors as well. The main character Tristan is played by the newer actor, Charlie Cox. Supporting him is the wide cast of Claire Danes, Robert De Niro, Mark Strong, Michelle Pfeiffer, Sienna Miller, Henry Cavill, Rupert Everett, Ricky Gervais, and the voice of Ian McKellan. As you can see a rather impressive cast!

Two of the actors truly turn this movie from any run of the mill fantasy movie to something truly special. The first is Robert De Niro as Captain Shakespeare. In some of the best scenes in the movie, the Captain befriends Tristan and Yvaine. He has a ‘fearsome reputation’ that he must maintain, but really he is an extremely camp man, with a secret closet of clothing and dresses. Not only do we see Captain Shakespeare jump from pretending to be super masculine to one of the campest characters ever, but the fact that it is usual tough guy, De Niro, makes the scene even better. His character brings a wonderful humor to the movie, as well as his crew’s acceptance, a good moral message. The best scene with his character is when he is interrupted by Septimus, while the Captain is playing dress up in a frilly, pink tutu.

Speaking of Septimus, this is the other character that really steals the spotlight during the movie. Played by the wonderful Mark Strong, Spetimus is brought to life in a way he never was in the book. Unabashedly ruthless, he is more than willing to kill off his brother’s for the throne (which is actually the tradition in Stormhold), and has no qualms about killing those that impede him. But it is his final fight in the movie that is not only a feat of acting, but one of the funniest fights I have ever seen. I had tears rolling down my cheeks when I saw this the first time. And even after watching the behind the scenes footage, I still have trouble figuring out how he did the fight!

The romance between Tristan and Yvaine is slow, but believable. The best part of the romance is defiantly Yvaine’s sharp wit. My favorite line is when she is talking about meeting Tristan and says, “And right here, this is where it got hit by a magical flying MORON!” The smiles and jokes that they share, even in the tough times, are nice without being cheesy.

The set, music and cinematography have all worked very well together for this movie. Without it being too different from the England we know today, the film has created a whole separate world in Stormhold. It is magical and wild, but also home to adventure and character building. The music really works well, and I would love to get my hands on it!

There are not that many movies that remain faithful to the original text upon which it is based, and even improves upon it. But this movie does. This is one of the few times I can say that while I like both the book and the movie, I think the movie actually edges out the book. I think most of this is due to the ending that the movie gave us, but also to the expansion of some of the peripheral characters.

Final Verdict: Grab a copy and a friend and settle in for a great night! Sugary sweets are also encouraged!